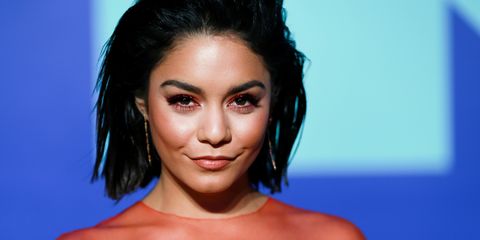 When you picture Vanessa Hudgens, what pops into your head? Maybe Hudgens as Gabriella Montez in High School Musical, rushing to get to "musicale" auditions, or maybe Hudgens as a newbie radio singer, dropping your favorite childhood songs "Say Ok" and "Come Back to Me."

Welp, you're about to think of Hudgens in a completely new way, because the singer-slash-actress-slash-Instagram-star just added the new title of makeup mogul to her long list of accomplishments with the launch of a new festival-themed eyeshadow and nail polish collection.

This content is imported from {embed-name}. You may be able to find the same content in another format, or you may be able to find more information, at their web site.
To get these ombré nails, Hudgens layered streaks of Beet Goes On (violet), My Tribe (orange), and Desert Dreams (copper) across the tip of a makeup sponge, then stamped the sponge over each nail to create a sunset effect.
Courtesy of Brand

Hudgens partnered with SinfulColors—she was recently named Global Color Collaborator of the brand—to create a nail and makeup collection specifically for festival season. "I personally love playing with makeup, nail colors, and nail art," Hudgens tells MarieClaire.com in an exclusive interview, "and I feel like festivals are just a time you can express yourself without any boundaries."

If you follow her on Instagram, you already know how much Hudgens loves to wear bold, unique colors, which is exactly what you'll find in her new line. Her nail polish collection, for example, comes in 12 bright hues like metallic silver, opaque teal, and shimmery coral, making it easy to trade in your regular mani for some wild ombré nails (pictured left on Hudgens).

Each polish is just $3 at Ulta stores and online, and the formulas are crazy long-lasting, meaning you won't need to worry about chipping or cracks between Coachella and Lollapalooza (okay, they won't last that long...).

As for the eyeshadow palette (aptly named Palatable Pleasures), Hudgens chose both matte and shimmery shades—including neon purple, mint green, and salmon pink—that are as easily blendable as they are opaque. Another bonus: The whole nine-powder palette costs only $15 and will be launching later this month on Amazon.

Sure, these bold shadows are the furthest thing from the subtle neutrals you'd wear to work on a Wednesday, but according to Hudgens, that's the whole point. "There are ways to incorporate color that aren't extremely overbearing," she says. "You can use your neutral eyeshadow colors and then pop a little blue in the corners of your eyes, and it'll just kind of brighten things up."

If it sounds like Hudgens is hella comfortable playing around with her makeup, it's because she's been doing it since she was a kid. "I was that 7-year-old with a bold red lip," she says, adding that her mom taught her that makeup was an expression of herself—and that statement colors shouldn't be feared.

So if you want to pack a bright orange shadow on your lids for the hell of it, Hudgens salutes you. "Don't censor yourself with beauty—just have fun with it," she says. And with a crazy-colorful line of eyeshadows and polishes, Hudgens just made the "fun" part a whole lot easier to achieve.

Courtesy of Brand
Alex Warner
This content is created and maintained by a third party, and imported onto this page to help users provide their email addresses. You may be able to find more information about this and similar content at piano.io
Advertisement - Continue Reading Below
More From Trending Beauty
I Tested Meghan Markle's Top Beauty Products
Glitter Pumpkin Butts Are a Thing for Halloween
Advertisement - Continue Reading Below
Behold: The Self-Tanner Fail to End All Fails
This Is Pinterest's #1 Halloween Makeup Idea
These 3 Products Cured This Woman's Acne
Princess Eugenie Just Dyed Her Hair Bright Red
13,000 People Swear By This Eye Cream
Post Malone Cut His Hair and Looks Unrecognizable
Shay Mitchell Will Only Use This One Concealer
People Are Freaking Out About Emma Stone's Hair