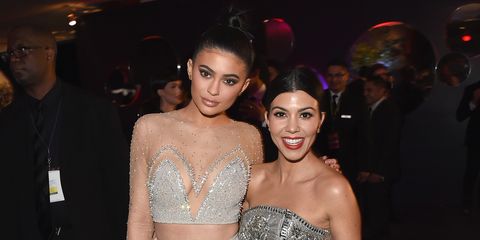 Kylie Jenner has teamed up with her oldest sister, Kourtney Kardashian, for a new collaboration for Kylie Cosmetics, Kourt x Kylie. The collection follows collaborations with sisters Khloé and Kim, so it wasn't exactly surprising when Kylie announced that she and Kourtney had teamed up for a line.

HAPPY BIRTHDAY TO THE QUEEN! 👑 so excited to announce the KOURT X KYLIE collaboration. this collection gives me so much lifeeeee! 3 mini palettes & 3 of Kourtney’s signature lippies launching 4/24! collaborating with you was so much fun! I love you! Check out my stories to see our collab @kyliecosmetics ✨ p.s. we are both wearing one of her new shades RAD in this pic!

"So excited to announce the KOURT X KYLIE collaboration," Kylie wrote in a post on her grid. "This collection gives me so much lifeeeee!"

The packaging is neon and metallic—perfectly extra:

There are three "lippies":

The Blue Palette has four shadows in golds and bronzes:

The swatches look amazing, with or without flash:

The Pink Palette is full of shimmery metallics:

And it literally includes a shade called "Gluten Free":

The red and green shades are called Mase and Matcha, respectively:

The lipsticks are called French Kiss, Minnie, and Rad:

French Kiss is a paler shade of pink, Minnie is a medium pink, and Rad is a bright red:

And she did using a filter that made her already-plump lips absurdly large, because why not?

Kourt x Kylie launches on April 24 and, when that happens, Kendall will be the only KarJenner sister without a Kylie Cosmetics collection of her very own.