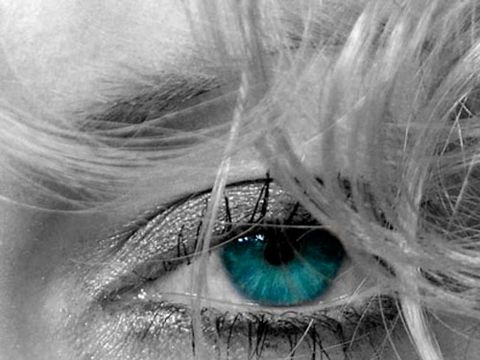 Q: What made you suddenly embrace your roots?

A: I saw a picture of myself standing next to my teenage daughter and realized I wasn't fooling anyone. My hair color, touched up every few weeks, was a really dark brown, but it didn't make me look younger or better.

A: Here, it's all about looking 25 until you're 95. There's also this idea that if you do go gray, you're giving up and simply not interested in your appearance.

Q: How do colleagues tend to react to someone who suddenly stops coloring her hair?

A: In corporate environments, where youth is such a valuable commodity, there's huge pressure to color your hair. I know a woman who let her hair go white, and her coworkers staged an intervention and made her dye it back again.

Q: How did men react when you let yourself go gray?

A: Not only was it not an issue, it seemed to be an advantage. Since I'm married, I decided the only way I could test it on men was to pretend I was single on Match.com. I made two profiles. Both listed my actual age — which is 50 — but one pictured me gray, the other with my hair dyed brown. Three times as many men in New York, Chicago, and L.A. "winked" me with my gray hair! And the guys who winked me in L.A. were in their 30s. As far as I could tell, they were all normal, healthy-looking men. I'm guessing they figured that if I'm being honest about my hair, maybe there won't be a lot of other bullshit, either.

Q: Who are your gray-haired idols?

A: Two great English actresses — Helen Mirren and Vanessa Redgrave. Jamie Lee Curtis is out there big-time, though very few other Americans are. Can you name one female senator with gray hair?

Q: What's been the takeaway from the experience?

A: I learned to focus on my whole appearance. Women think if they have the same hair they had at 20, they get a pass with everything else. In fact, I also needed to lose weight and buy some new clothes — which I did, and I look better than ever. Hair color does not camouflage all sins.

Q: Will you ever go back?

A: Never! To be the only person with my particular color hair is thrilling. It shines more now than it ever did. I love the idea that every year for the rest of my life, my hair will change color naturally. And I found out I've got great natural highlights.

Anne Kreamer is the author of Going Gray: What I Learned About Beauty, Sex, Work, Motherhood, Authenticity and Everything Else That Really Matters, from Little, Brown.

How Jamie Lee Curtis's gray matter made youth-mad Hollywood do a double-take.

MC: When did you stop coloring your hair?

JLC: Seven years ago. I wanted to stop way before I did, but at the time I was a spokesperson for VoiceStream Wireless, and they didn't seem too interested in the idea.

MC: How did people in Hollywood respond?

JLC: Oh, I had people who were emphatic in their disapproval, insisting it would age me. Now they're all eating crow and saying how right I was to do it.

MC: Since you're in the public eye, was the transition hard?

JLC: It helps if you can be courageous and cut your hair off like I did. It's much harder to transition with longer hair, since then you're stuck with two inches of gray roots.

MC: Has gray hair had a negative impact on your career?

JLC: I don't think so. Right now I'm making a movie where I play a woman who works in the beauty industry. I offered to wear a wig, but the director chose to go with my natural hair.

MC: Have you changed your routine?

JLC: My stylist, Sean James, keeps my cut edgy and contemporary — otherwise I can go Bea Arthur very quickly. And I love Phyto Phytargent shampoo. It's the color of balsamic vinegar, but it adds the most incredible shine to my silver hair.

This content is created and maintained by a third party, and imported onto this page to help users provide their email addresses. You may be able to find more information about this and similar content at piano.io
Advertisement - Continue Reading Below
More From Hair
The Best Hair Dryers for a Pro Blowout Look
55 Chic Haircuts to Add to Your Mood Board
Advertisement - Continue Reading Below
Curly Hairstyles That Are All About That Texture
Oh, Baby!: The Art of Baby Hair
Why Sisley's Restructuring Hair Balm Is Worth It
Gorgeous Long Hairstyles for Every Texture
Ombré Styles for Dark Hair to Copy This Fall
The Easiest Hair Masks for Healthier Strands
How to Flawlessly Transition to Natural Hair
The Prettiest Hair Colors for Dark Skin Tones