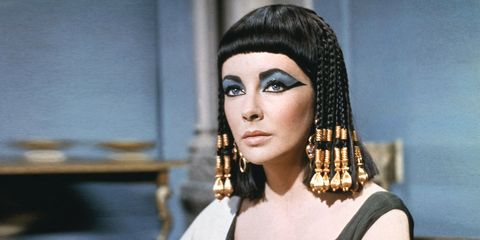 It probably comes as no surprise that ancient Egyptians were quite the beauty enthusiasts. Both men and women indulged in makeup, perfume, and beauty rituals they believed not only enhanced their appearance, but also had magical and religious powers. Here, a look at how people kept themselves lookin' good more than 5,000 years ago.

Egyptian women often used this natural pigment as lipstick and cheek stain. The ochre was ground finely and mixed with water then applied with a brush to the lips and face.

Kohl is one of the most well-known cosmetics that came out of Egyptian culture. It was made from heavy metals with high concentrations of lead salts. Though lead can be dangerous, the Egyptians processed and filtered the materials for up to 30 days before creating the eyeliner prototype. The low levels of lead left over actually protected their eyes from the sun and boosted the skin's ability to fight off infections! Egyptians were also the first purveyors of the cat eye we all love (and struggle with) so much.

Egyptian women used burnt almonds to paint their brows black and fill them out. They were on top of the eyebrow game before it even got started.

Henna can do much more than just beautiful skin detailing. The Egyptians used henna to naturally dye their fingernails yellow and orange. Researchers found that the henna conditioned their nails as well. All natural and growth promoting? Count us in.

The Ancient Egyptians were obsessed with beauty and the idealized version of themselves. Pharaohs were always depicted as slender and young despite their true appearance. Aside from in art, wealthy Egyptians used oils to fight wrinkles and preserve their youth.

Cleanliness and hygiene were highly favored among the ancient Egyptians. They made soap paste out of clay and olive oil. The soap would cleanse the body as well as nourish and heal the skin.

It is believed that Cleopatra took milk baths as a skincare treatment. The lactic acid exfoliated and rejuvenated the skin. If you're not excited about jumping into a bath or warm milk, try products with hydroxy acids in them.

Another beauty secret straight from Queen Cleo herself is Dead Sea salts for the skin. The Dead Sea is known for is natural healing properties that replenish essential minerals lost during daily activities.

Hair removal has clearly been a thing since the dawn of time because even the Ancient Egyptians were attempting to get rid of it. Body sugaring is a natural (have you noticed a trend yet?) method to remove hair. This method is less painful than waxing with the added benefits of exfoliation and the elimination of skin irritation.

The Beauty Secrets of K-Pop Stars

Ghassoul Is the Beauty Secret You Never Knew You Needed

The Beauty Secrets of Bollywood Stars

Simedar Jackson I'm Simedar, an intern here at MarieClaire.com!
This content is created and maintained by a third party, and imported onto this page to help users provide their email addresses. You may be able to find more information about this and similar content at piano.io
Advertisement - Continue Reading Below
More From Beauty
Found: Face Washes That Work Miracles on Acne
The Editor-Approved Curly Hair Products You Need
Advertisement - Continue Reading Below
Give Your Skin a Shot of Moisture With This Serum
Our Favorite Perfumes of the Year (So Far)
The Nail Trends for Spring Are All About Optimism
These Shampoos Will Make Your Hair Grow Super Fast
24 Hours With Hailey Bieber
Acne Spot Treatments That Actually Work
Why The Lashify Control Kit Is Worth It
What to Buy From Sephora's Spring Savings Event