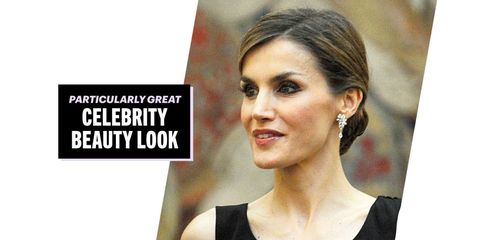 She doesn't get as much play as her British counterpart, but she totally should. Girl knows her away around a hairline braid…

And this ingenious method of applying eyeliner.

In a spin on the ol' nude-on-the-waterline trick, she's brought the line a smidge away from the bottom outer corner for a kind of animé-ish, trompe-l'oeil effect that's flattering/eye-enlarging in pictures and *super modern* in person. (At least, I imagine I would think that if I were the president of Peru attending a reception in my honor, which is where this photo is from.)

The only way she could do better in my book is if she were to try out the rhinestone strip from Rodarte Fall 2015. Then she would graduate from a Queen to a Khaleesi KWEEENNN.

Chelsea Peng I'm Chelsea Peng, the assistant editor at MarieClaire.com.
This content is created and maintained by a third party, and imported onto this page to help users provide their email addresses. You may be able to find more information about this and similar content at piano.io
Advertisement - Continue Reading Below
More From Beauty
Found: Face Washes That Work Miracles on Acne
The Editor-Approved Curly Hair Products You Need
Advertisement - Continue Reading Below
Give Your Skin a Shot of Moisture With This Serum
Our Favorite Perfumes of the Year (So Far)
The Nail Trends for Spring Are All About Optimism
These Shampoos Will Make Your Hair Grow Super Fast
24 Hours With Hailey Bieber
Acne Spot Treatments That Actually Work
Why The Lashify Control Kit Is Worth It
What to Buy From Sephora's Spring Savings Event