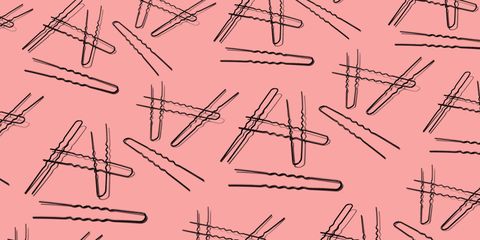 So if only a handful of these weird, underground hairpins can securely hold up my Parmigiano-wheel-proportioned chignon, imagine what they can do for yours. Yeah—everything.

During the same David Mallett styling session in which I was conditioner-shamed in a good-hearted, Gallic way, I also had about 75 pins attached to my scalp. Approximately three of these were of a kind I've never seen before: short and straight and heavy, but with the ends bent perpendicularly. They were stabbed fork-side up and in, the acute angles giving even more long-lasting hold than the waves of a regular hairpin.

"What are thooooose?" I asked way too late, AKA after a night of Bollinger and manic dancing and *still* waking up with my artfully twisted up-do intact. I fully own up to this as a journalistic failure, because as with all worthy things, they were kind of a pain to track down—even Kat Zemtsova, who's a bomb stylist herself and therefore has access to the hair-accessory black market, came up almost empty-handed after my own internet search turned up nothing. (There's a happy ending, though, so stay tuned.)

The closest commercially available in the U.S. version of these secret, magic pins: these, designed specifically for dancers. The actual 8-centimeter "Fedora" pins: these, from a French salon supplier that definitely doesn't do free international shipping. But then again, even if we don't have these exact épingles à cheveux, we *do* have good, old-fashioned American innovation—a pair of pliers and some elbow grease, and no one will know the difference.