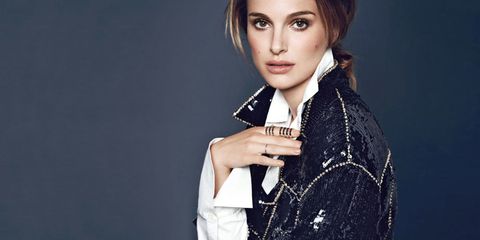 I can still remember the smell of my grandmother's makeup. She would spend two hours putting on her face every morning before she would let anyone see her. Despite this legacy, my first experience getting made up didn't really involve makeup. It was for my first film, The Professional, and the makeup artist didn't want to use much product on me because I was just a kid, so she would mix beet juice and rose water and apply that to my lips and cheeks.

Now, I'm more of a lipstick person. When I moved to Paris two years ago because my husband took a job at the Paris Opera Ballet, I found it was more of a red-lip city than anywhere else, so I wore Dior's #999, a bold, classic, matte red. It has all of that passion and seduction that you want out of a red lipstick. We moved back to Los Angeles this summer. Here, it's obviously more playful and sunny, so I gravitate toward lighter, beachy colors like coral and pinks. For day, I like Dior's Grège.

Makeup makes me feel confident. I feel like if I'm put together in the morning, everything else follows and I have more control over my day. But as a working mother, I've learned to be comfortable with imperfection. Maintaining a work-life balance is a challenge for everyone.

I personally stay away from social media because when you have a lot of attention on you already, privacy becomes the most valuable, luxurious thing, and it feels nice to just keep that little corner for myself. The idea of celebrity is changing these days, but I think it's dangerous to think of yourself as a brand instead of as a person. I try to be true to myself, and hopefully that projects an image so people can understand who I am from afar.

[pullquote align='C']"when you have a lot of attention on you already, privacy becomes the most valuable, luxurious thing."[/pullquote]

I recently played Jackie Kennedy [in], which gave me some insight into her life. She was criticized so much for her style—[then] the public became obsessed with her style. But she didn't try to bow to anyone's demands. She had confidence and became a style icon, just by being herself.

1."I'm vegan and always try to make sure my skincare products are, too. I like to use this moisturizer, which is vegan and organic."

2. "Makeup artist Stéphane Marais always told me that it's important to apply mascara at the roots of the lashes, to frame the eye."

3. "[Dior beauty creative and image director] Peter Philips taught me that you can double your lipstick as a cream blush. Grège, my go-to shade, is great for this."

4. "I use this every third shampoo. The salt is supposed to be good for stimulating the scalp, and I like anything that relates to a head massage."

This article appears in the November issue of Marie Claire, on newsstands November 18.

This content is created and maintained by a third party, and imported onto this page to help users provide their email addresses. You may be able to find more information about this and similar content at piano.io
Advertisement - Continue Reading Below
More From Beauty
Cool Braids to Steal the Show With This Summer
24 Hours With Instagram's Favorite Makeup Artist
Advertisement - Continue Reading Below
Cream Eyeshadows That Won't Ever Budge or Crease
Vitamins for Your Shiniest, Healthiest Hair Ever
NATIVE Deodorant Is a Clean Beauty Miracle
There's a BB Cream for Every Single Skin Type
Consider This a Sign to Get a Lob This Summer
Foot Peels Are Your Satisfying Secret to Soft Feet
Bronzers That Leave Your Skin Sun-Kissed & Glowing
The Dry Shampoos You Can Count On