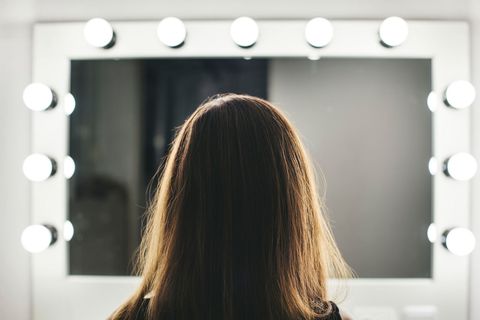 Few of us have Dr. Pimple Popper's prowess and thus, more often than not, our attempts to squeeze the living hell out of a zit backfires. You'd think we'd have learned by now, but hell hath no fury like a woman with an XL whitehead on the eve of an important event. And so we looked to dermatologist Dr. Mara Weinstein of Schweiger Dermatology Group in NYC to decode exactly what a whitehead is, as well as how to pop one *safely*—because sometimes there's no turning back now.

Why You *Shouldn't* Pop a Whitehead

A whitehead is a non-inflammatory acne lesion that develops when a follicle gets plugged with dead skin cells, bacteria, and oil. And here's why it's in your best interest not to mess with one.

"The cells lining the follicle are still in tact so there is usually not much redness or erythema surrounding the whitehead itself," explains Dr. Weinstein. "If you attempt to pop the whitehead too aggressively, the lining of the follicle gets disrupted and your immune system gets involved because now the bacteria, oil, and debris will leak into the surrounding area causing redness, tenderness, and sometimes even a cyst."

So make no mistake, dermatologists will strongly advise you to leave all acne, including whiteheads, alone. "Usually they will resolve on their own and quicker than expected," she explains, adding that if left alone, the risk of post-inflammatory erythema, the redness that develops and lingers after popping pimples, as well as cyst formation and/or an infection lessens significantly.

Okay, one more plea in the name of safety and not scarring your face. Before attempting to do it yourself, consider seeing a board certified dermatologist to help extract the whitehead if it's really bothering you. Okay, we're done.

If you must, Dr. Weinstein recommends using a warm compress to soften the follicle and allow the white part to gently slough off. Then, when you squeeze it "avoid squeezing from both sides as this can disrupt the follicle."

If you're having trouble getting the pimple to pop, leave it alone. If you were able to make it ooze with ease, congratulations. The final step? "Use a spot treatment with benzoyl peroxide or salicylic acid to help break up those dead skin cells and kill the bacteria more quickly," she advises.