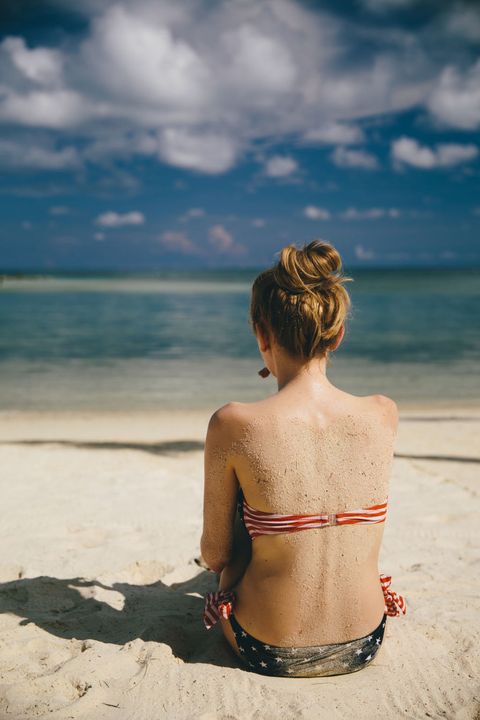 Over the years, alarmist sunscreen headlines have gotten bolder, even blasphemous, with stories that favor clicks and shares over accuracy. We asked experts to evaluate some of the "news" in circulation and separate fact from fiction.

Fake News: Chemical Sunscreens Are Toxic for Your Skin

Why it went viral: From celebrities to hypochondriacal Facebook friends, plenty of people believe that chemical sunscreens are harmful. And some studies have even shown that benzophenones (like the common sunscreen chemical oxybenzone) may possibly lead to fertility issues and cancer.

The truth: "It would take a human 277 years using a lotion with 6 percent oxybenzone all over, every day, to build up to the amount of the chemical shown to affect the rats in those studies," says Dr. Heidi A. Waldorf, director of laser and cosmetic dermatology at The Mount Sinai Hospital in New York. The SPF ingredients used in the U.S. have an excellent safety record in humans, and calling them dangerous is a gross exaggeration, she adds.

Why it went viral: Over the past few years, some have questioned the ability of SPF to prevent skin cancer, pointing to a 2011 paper in the journal Photodermatology, Photoimmunology & Photomedicine that stated, "Evidence demonstrating the protective effect of sunscreen in the prevention of melanoma is inconclusive."

The truth: That statement has been disproved by newer research, says the New Jersey dermatologist who cowrote that article, Dr. Steven Q. Wang, cofounder of Dr. Wang Herbal Skincare. As he explains: At the time of the report, about 23 studies had looked at sunscreen's protective effect; half showed a correlation between its use and cancer protection, and half showed a correlation with cancer risk. "But those studies were retrospective—they relied on people's memories, which introduces a bias," he says. Later in 2011, a groundbreaking Australian study following 1,621 subjects for 10 years was released, and it showed that daily sunscreen use lowered melanoma risk by more than 50 percent.

Bottom line: In 2017, "We can definitively say that sunscreen protects against skin cancer," says Wang.

Why it went viral: Bloggers often post DIY sunscreen recipes and rave about the sun-shielding powers of naturals like red raspberry seed oil ("SPF 25!"), carrot seed oil ("SPF 35!"), and good ol' coconut oil ("SPF 4!"). Some antioxidants and botanicals actually can reduce the inflammatory response of skin exposed to UV radiation, and may even offer a small amount of UVB protection for a short period of time, says Waldorf.

The truth: That said, "There is no evidence that any of these ingredients offer enough stable protection to be used as sunscreens on their own," says Waldorf.

Bottom line: "It's impossible to tell how much protection any ingredient offers without lab-testing the finished product," notes California dermatologist and Karyng founder Dr. Karyn Grossman.

Why it went viral: NYC dermatologist Dr. Robert Anolik thinks this rumor took off in 2012, when the U.S. Department of Health and Human Services selected retinyl palmitate for toxicology screening.

The truth: "They generally examine any ingredient common in cosmetics, even aloe vera," Anolik explains. Retinyl palmitate, a vitamin A derivative, is naturally found in skin cells, and dermatologists have prescribed forms of vitamin A for years to treat acne and photoaging. "There's no evidence that it increases cancer risk," he says.

Bottom line: If you're still not convinced, just choose a sunscreen without the ingredient.

This article appears in the April issue of Marie Claire.

Advertisement - Continue Reading Below
More From Beauty
Hourglass' CEO Shares Her Morning Beauty Routine
All the Details on Brow Lamination
Advertisement - Continue Reading Below
These Makeup Trends Will Dominate the Year
Yes, You Need a Silk Pillowcase
WORTH IT: La Mer Renewal Body Oil Balm
Shampoos to Make Your Hair Grow Super Fast
These Are the 3 Lipsticks I'm Obsessed With RN
The New Fragrances You Need to Try This Year
Blake Lively Looks So Different With a Bowl Cut
It's Winter, You Need One of These Lip Balms