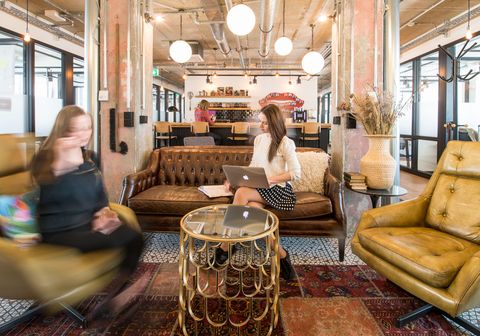 I came to New York at age 20, a Latina ready to conquer the city with a swipe of red lipstick and a collection of rhinestone sandals. I didn't have many friends, and the ones I did make had their own "tribes" already—Crossfit groups, LGBT clubs, soup-swap gatherings. So, I wondered, which one's going to be mine?

The answer came quickly: A startup. If you watch Silicon Valley or happen to know anyone who works at one, you know the kind of place I'm talking about—full of young people (probably wearing plaid), all about a "cool" office culture. No suits here. More like...beer-chugging contests every Thursday at 5.

On my first day, I arrived at the office, a lumpy building in the Flatiron District. The elevator was a rusty heap frequently flanked by piles of trash bags. The office itself was plastered in goofy signs and hula-hoops. We had three calendars—a goats calendar, a trees calendar, and a goats in trees calendar—along with conference rooms named "Gin" and "Whiskey" and a set of cubbies labeled with each person's name.

"We kicked off every day with an icebreaker question and bonded on shuffleboard outings, boat rides on the Hudson, and cooking competitions."

The space was a dive dressed up in happy colors. Much like my first apartment.

To make things even more casual, the group had a family structure. At the head of the table were "the parents": our 20-something, broad-shouldered CEO and our head of content, a witty former ballerina. I openly sought their approval as though I was their actual kid.

My coworkers included a California yogi, two Frenchmen who were avid weight lifters, a pair of designers with a mutual love of hip-hop, a Finnish guy with encyclopedic knowledge of Gilmore Girls, and a podcaster/community activist. A merry band of Millennials if ever there was one.

They were all younger than me, smarter than me, more tech savvy, and with much better footwear.

We kicked off every day with an icebreaker question and bonded on shuffleboard outings, boat rides on the Hudson, and cooking competitions. We even sent each other anonymous "you're awesome" notes. In an office full of pranksters and performers, I was floored by how sincere they were.

"To one of the most joyful, thoughtful, positive, wonderful people I've ever met—thank you for being you!" one note to me read.

"I wasn't just drinking the Kool-Aid—I was sporting the Bermuda shorts."

It was all wildly seductive, I'm not going to lie. My work history had been mostly large, established corporations where you could know someone for years and never discuss anything deeper than the weather. Office friendships were rare and unfolded at a glacial pace. Life was compartmentalized: I had my professional exterior, my social interior, and that squishy sentimental core that only my inner circle could access. But not here.

I became absolutely insufferable to my friends outside work. I gushed to everyone I knew about how wonderful and quirky this new community was: "We get into sing-alongs with the CEO at our desks!" "We go to boot camp classes together!" "We're all going to dress up like sailors!" I wasn't just drinking the Kool Aid—I was sporting the Bermuda shorts.

But before long, clouds started to appear above my aggressively sunny head. First, the age difference: I was a good 10 years older than just about everyone else, which made me feel like a 90-year-old vampire pretending to be a teenager in high school.

I tried to sound like them: "BAE! I'll miss you guys, like, WHOA!" was the note I actually sent my actual coworkers when I left for vacation.

Another cloud was the company photo on the office fridge. It was a yearbook-style snapshot of the team at Medieval Times in paper crowns, because of course. The photo was taken just a year back, yet practically everyone in it had vanished. I'd heard rumors of firings, tears in the hallways, emergency calls home. But surely that wouldn't happen now. We were having too much fun.

All this was the darkening sky. The job itself was the real storm. It was an endless jamboree plus an endless pile of work. (Or as my colleagues put it, "werk.") I came early. I stayed late. I kept a notepad by my bed for ideas that came to me in dreams. More than once, I hauled my laptop out at 4 a.m. to start my day.

"I was a good 10 years older than just about everyone else, which made me feel like a 90-year-old vampire pretending to be a teenager in high school."

One day I met the CEO and the head of content in the "Gin" room and presented an idea for revising my role in a way that I thought best served everyone. But the CEO had prepared a speech of his own.

"We're big fans of yours," he told me, "and we want to see you in a role where you can thrive. Unfortunately, it isn't here." It was a kind speech that had clearly been rehearsed and used repeatedly on others.

I could feel the slow, plunging sensation of heartbreak as I heard his words. I thought about the paper crowns. I was determined to be dry-eyed and calm.

But what followed was anything but classy. I melted into a babbling confession of all my shortcomings to anyone who would listen. I cried on the subway. I cried in yoga class. I called my mom almost hourly. This was my status update: mid-30s and already a total has-been.

At night, when I couldn't sleep, I'd replay shameful office moments, like the morning meeting when I predicted Facebook would end in 10 years (lol), or the instant-messaging chat when I used "roll deep" incorrectly (too little too late, Urban Dictionary).

Then my anger bubbled up. I'd take these lemons and make napalm! I'd plot joining a better, flashier startup. Or I'd fantasize about, you know, becoming BFFs with an A-list celebrity. "Sorry I haven't kept in touch! I've been too busy hanging with Gigi," I'd say.

Now, over a year later, I work at a global digital company with long-term employees. I'm surrounded by a range of ages, and I no longer feel like a 30-something imposter.

If I'm honest, I still miss the hula-hoops, the sundaes, and the freewheeling feeling of fun you get when you're working with a bunch of kids with no rules. But on the deepest level, I know I'll never really know what "bae" means—and I'm just fine keeping it that way.