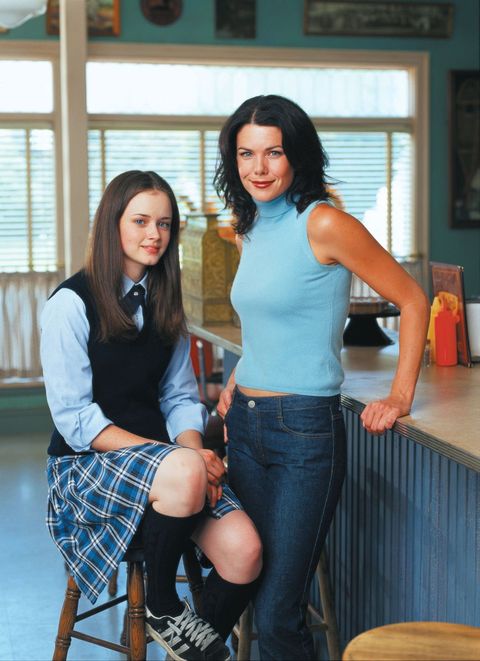 Reader, allow me to tell you about the time I was attacked.

I was minding my business at work, typing away, when a group of coworkers simultaneously fangirled out over the announcement of the upcoming Gilmore Girls reboot. Multiple pairs of eyes stared at me expectantly, waiting for me to chime in about my anticipation for the return of Stars Hollow. And then came my mistake: I admitted I'd never seen the show. Collective shrieks, shudders, and accusations ensued. I quickly took to Twitter to see if it was really that big of a deal that I'd never seen the series. I mean, come on: I never had a BFF relationship with my mother, and the show—like many other shows of that era—was known for lacking people of color like me (aside from proudly Latina Alexis Bledel). So why would I have ever watched?

Twitter, however, was on the side of my coworkers, insisting it was a must-watch for all TV lovers (and millennials). And so began the chapter in my memoir that will be titled "That Time I Binge-Watched Seven Seasons of Gilmore Girls In Two Weeks."

I was rolling my eyes at the cheesiness of the first few episodes. I mean, no small town is ever that perfect. And how could any woman on the planet (Chrissy Teigen excluded) eat that much junk food and still be that skinny? Plus, throughout the entire season, Michel the French inn receptionist was the only black person I saw in the entire town.

There was no way I was going to make it through this series, I thought. And then, a curious thing happened: I saw Rory's character develop into an outsider at her private school, the kind of girl who likes to read at lunch and proclaim she wants to become a journalist who travels the world. Suddenly, I realized: Minus the 32-year-old mom, Harvard aspirations, and melanin differences, Rory was...me. An awkward, music-loving, daydreaming bookworm with a penchant for coffee and pizza. At one point, her new love interest Dean says to her, "I've never seen someone read so intensely in my entire life," and I swear he looked deep into my soul as he said it. Damn you, Amy Sherman-Palladino. You got me hooked.

By this point, whenever I heard the opening notes of Carole King's "When You Lead," I was cheerfully singing along to the theme song (did I mention I live alone?). With their witty, movie reference-filled banter, Lorelai and Rory started to feel like the friends I could count on to lift me out of reality, even if just for a little while. I finished this entire season in a day (possibly while wearing sushi roll-printed pajamas). I even drank two extra cups of coffee each day, hoping it might help Luke and Lorelai fall in love over a pot of joe just a little bit faster. And hey, guess what? I saw one more brown face. Of course, it was Michel's mom, played by Janet Hubert (aka Aunt Viv) with a terrible French accent. But hey, it was something!

Sidenote: After Rory and Lorelai, this was the season I decided Sookie is my favorite character. Of course her response to Jackson saying they should get married was "Are you pregnant?"

This stage in the series brought along a state of delirium that crossed over from my couch to my sleep pattern. I started having vivid dreams about eating burgers in Luke's diner and arguing with Rory over our weekly Friday dinner at Emily and Richard's. I decided I was desperately in need of a break. But the hiatus didn't last long; 24 hours barely went by before I was craving Lorelai's I'm-going-to-act-like-Luke's-not-in-love-with me routine and ready to dive back into the love triangle between Rory, Dean, and bad boy Jess (whose love of reading was admittedly sexy but, #TeamDean).

I was shocked when Rory decided to attend Yale over Harvard, which had been hammered into our brains since the first episode. While it was great to finally see her head off to college, this was my least favorite season; it began to drag on a bit. And also DEAN GOT MARRIED AND THEN RORY LOST HER VIRGINITY TO HIM. WHAT. As bad as it was that Rory lost her v-card to a married man, I have to admit that I thought that somehow, it worked as an imperfect, full circle moment. After all, he was her first love. (Can you tell I'm biased?) The only upside to season four was that I could continue my love/hate relationship with Paris Geller, who somehow mysteriously also ended up at Yale with Rory. (By the way, in my mind, Bonnie on How to Get Away with Murder literally is who Paris Geller grows up to be.)

Alright, so I take back what I said about season four being my least favorite. THIS was the season I hated most. Rory dropping out of school and giving up our—er, I mean her—journalism dreams FOR A BOY? If my nephew wasn't named Logan, I would never want to hear that name again. But let's get to the real bone I have to pick with the GG creators. You made me wait five entire, 22-episode seasons for Lorelai to just casually propose to Luke in conversation? THAT was how they got engaged? No romantic running to one another past twinkly Stars Hollow lights and the la la la la la laaaa song playing in the background? I curse this show. And STILL NO MORE BROWN FOLKS!

Okay, okay, despite the curse, I stuck with it. But this season dragged on for me; I could tell that at this point everyone, actors included, knew it was time to wrap things up. Predictably, to keep the drama going, they had to create a rift between Lorelai and Rory, but it didn't feel authentic; neither did Rory's relationship with Logan. I stand by the fact that the smart and ambitious Rory we had grown up with was too smart to have made the decisions she made with Logan, but then again, I'm smart and ambitious and I've made some dumb decisions regarding men too, right? So I guess reality, and all that. Of course, the low point: Luke and Lorelai's break up. Confession: I yelled "Nooooo!" at my screen. Loudly. Then allowed Netflix to bring me on in to the home stretch.

Are there any words more painful than "Luke. I slept with Christopher"? (I will admit, I secretly adored Lorelai and Christopher together and, despite knowing she was destined for Luke, always kind of rooted for her to be with her baby daddy in the end). Again—and maybe it's because I watched all seven seasons back-to-back like a crazy person—this season felt too long and like the show was past its prime. But I was overjoyed that Rory turned down stupid Logan's proposal (#TeamDean4Lyfe) and devastated for her when she didn't get The New York Times internship. Over all, I commend the writers for giving us a satisfying ending here; Rory meeting Christiane Amanpour at the beginning of the finale and then ending up as a campaign reporter for the Obama campaign couldn't be any more perfect, and I'm glad Luke and Lorelai's future after that delicious kiss was left open ended (a last-minute wedding would've been too predictable). I may or may not have sobbed uncontrollably during Rory's goodbye party, when we had to bid adieu to all the personalities that had started to feel like neighbors over the years (or for me, over two weeks). And that final scene in Luke's diner? Spot-on Gilmore Girls: A little cheesy, a little unrealistic, but heartwarming and irresistible.

And so, my final thoughts: If you are a Gilmore Girls virgin looking to start for the first time, I would recommend it. I'm proud that I can now take part in Luke's diner jokes and commiserate with viewers about how Rory didn't end up with Dean in the end. I stand by my wish that there were more people of color on the show, and I still think the girls should've eaten a salad or two every now and then. But now, here I am, waiting anxiously for the reboot like the rest of the world.

Here's hoping Rory is running CNN and Lorelai is running her kick-ass in...while pregnant with her *husband* Luke's twins.