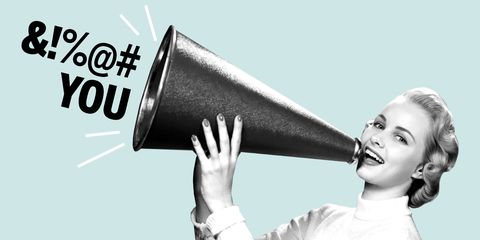 If you're reading this, it's too late—you've probably been involved in an incident during which your brain couldn't come up with a snappy response fast enough at the operative moment but eight hours later, gave you 76 options that were all amazing. *pats the air above your shoulder* We've all been there.

Because there is no such thing as a conflict-free work environment, it is necessary to keep some A1-but-not-so-A1-you'll-get-in-trouble burns in the back pocket of the pants you take off as soon as you get home. To help us craft a few retorts that 1) show you've got backbone but 2) aren't so mean that the situation escalates into an all-out war, we consulted Vicki Salemi, career expert for Monster. Spoiler alert: "Your mom" as a comeback is both "unprofessional" and "juvenile." Or so we've heard.

A colleague throws you under the bus at a meeting, taking credit for your work and saying you didn't pull your weight. The nerve.

The comeback: Defend yourself in an assertive, firm, fact-based manner. "Deadbeat Derek must be mistaken. I built the rocket boosters and the orbiter, and I used my dual degrees in molecular gastronomy and design to invent a new way to package Doritos without the nacho cheese dust floating away everywhere in zero gravity."

Like this is second grade and we haven't matured past telling on one another, Tattletale Taylor suggests—in front of your entire department, no less—that you've been playing hooky.

The comeback: In a firm, confident, grown-up manner say "I've been taking the time I am eligible for and no more." I mean, mic drop.

You are on a business trip. In front of a room full of colleagues and higher-ups, you ask a valid question. Jealous Jezebel snarks, "That's the smartest thing you've said all day."

The comeback, part 1: First, employ the deep breathing technique you learned that one time in Ashtanga 1, but don't inhale so deeply that that you-know-what can see you doing it. She wants to provoke a reaction, so stay level, even when you take her aside later and say, "That was unprofessional. I don't appreciate getting disparaged like that. If you have an issue with my contributions, share that with me directly next time."

The comeback, part 2: Put the focus back on the person who was being inappropriate, because underneath their lack of eye contact, everybody in the room's like, "Wow. What a [redacted]." Still confront the offender post-meeting, but in the moment, you can add something like, "Our goal here is to run a successful program together, so I'll definitely have more smart questions coming your way."

For seemingly no reason at all, Gen X Gerald goes, "You Millennials are all the same: ungrateful, entitled, and you wear your pants too tight."

The comeback: Gerald has another think (and a whole story) coming.