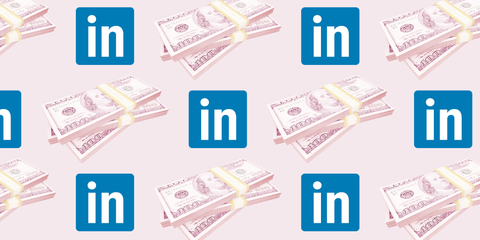 The lawsuit claims LinkedIn sent too many emails in that time period, and takes particular aim at a feature called "Add Connections" in which one click allows LinkedIn to basically email your entire inbox.

Then it sends them two reminder emails.

Those reminders emails are why LinkedIn owes some of its users money—the settlement says users didn't consent to having them sent on their behalf.

LinkedIn has denied all wrongdoing, but you can still make bank. How? First, you need to have used "Add Connections" between Sept. 17, 2011 and Oct. 31, 2014. LinkedIn sent an email on Friday notifying its users of the settlement. If you received the email, unearth it from your inbox and respond. If you deleted it, or never received one but feel you should be included, you can provide your information on a website created by the lawyers in the case.

The amount it pays out depends on how many people join the settlement.

The business-news website Quartz points out that the timing of LinkedIn's notification email about the settlement is interesting: They sent it on Friday afternoon—a time when people likely aren't paying attention. But now you know, so go get that 💰.

CORRECTION: An earlier version of this story said LinkedIn might owe you $1,500. The amount LinkedIn will pay out in this case is currently unknown and depends on how many people claim to be part of the class action. The $1,500 payment is solely for the nine plaintiffs who initiated the litigation and is subject to the court's review and approval.

Michael Sebastian Michael Sebastian was named editor-in-chief of Esquire in June 2019 where he oversees print and digital content, strategy and operations.
This content is created and maintained by a third party, and imported onto this page to help users provide their email addresses. You may be able to find more information about this and similar content at piano.io
Advertisement - Continue Reading Below
More From Money & Career
What Happened at Marie Claire's Power On Event
Is My Workplace Watching Me?
Advertisement - Continue Reading Below
Chef Moe Is Feeding Maryland's Hungry
The Moms Who Had to Postpone a Travel Gap Year
Couples + Money
Women Marry Their Glass Ceilings
These Women Are Making Space Vacations a Reality
The Women Making WFH Happen
Building a Business That's Also a Safe Space
The Unemployed Couple Squatting in Their Apartment
Couples + Money
Today Marks Black Women’s Equal Pay Day