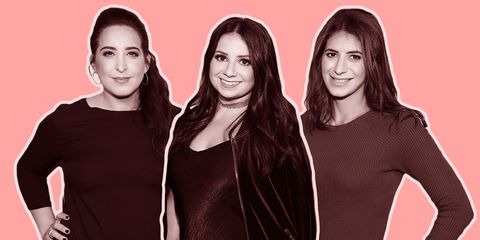 When it comes to the art of adulting (make that functional adulting), the Betches are, to use 2016's most abundant hashtag, #goals. You probably already follow them on Instagram, but the Betches—otherwise known as Aleen Kuperman, Samantha Fishbein, and Jordana Abraham—also have a website, two books, a store, and a newly minted podcast. In other words, they slay like it's their job. Which it is.

As part of our recent collaboration, MarieClaire.com spoke to the Betches about four topics that are undoubtably on every aspiring adult's mind: work, relationships, friends + family, and what we're going to go ahead and call "mindfulness." Let's break this betch down.

In case you haven't noticed based on their internet domination, the Betches are extremely good at what they do. They're also definitive proof that millennials are not, in fact, wayward drifters who coast off the coattails of their parents. We're the kick-ass generation that fostered three 20-somethings who run their own media empire—and the key to their success is being themselves. Sounds cliché, but it's the straight-up truth.

"Be yourself," Kuperman says. "We found a voice and were consistent with it. Be unique, and do something no one else has already done."

Killing your career (like, in a good way) means you have to understand yourself, your strengths, and your weaknesses—and it also means you can't care too much what other people think. "Not everyone's going to love everything you do," Fishbein explains. "The internet tends to get very extreme very quickly, people have no qualms about saying 'I hate you, you're the worst person ever, you should die.' Everything gets very intense—and if you step back for ten seconds, you realize it's just a post. In ten minutes, everyone will forget about it."

Obviously, part of being a working female is dealing with sexism because #GlassCeiling, #Patriarchy, #Ugh, etc. And honestly, the best way (and the Betch way) to deal is rising above said sexism. "It's definitely something women in power deal with," Abraham says. "You deal with more scrutiny about the things you say. The best way to deal with that is to just keep succeeding and doing the best you can."

Ways to stay sane: drinking wine, eating pizza, watching Netflix, and—if you're one of the Betches—practicing the art of mindfulness. Due to being chained to their phones and computers Kuperman, Fishbein, and Abraham meditate at a place in New York City called MNDFL (get it, like Mindful, but without any pesky vowels?), which Samantha describes as " like SoulCycle for sitting on a cushion."

"I think mindfulness has become trendy as a response to the ADD nature of life—social media, your computer, your screen," Kuperman says. "I find myself forgetting what I'm doing all the time, and having to backtrack like four steps to remember my original goal."

Other helpful Betch-approved mindfulness tactics include not answering emails on weekends, doing yoga, taking time out of your work day to recharge, and taking a break from your phone. "There's that idea of 'do I own my phone or does my phone own me?'" Abraham says. "I feel like its my master. The longer I put it away for, the more I'm like, you don't own me."

Hands up if you agonize over a) whether the guy or girl you're into likes you back, and b) what you could be doing differently to make them like you back. If your hands are down, congratulations, you're doing dating right. If they're up, the Betches suggest you re-think your strategy.

"The guy or girl who likes you is gonna like you," Fishbein says. "That's the bottom line. A lot of girls forget this isn't an audition where you're trying to impress the judge. Or, if it is an audition, it's a mutual one. You want to ask yourself, 'Is this person right for me just as much as I want to be right for them?"

Bottom line: identify what you want from a partner rather than what they might want from you. "Instead of asking 'why doesn't he like me?', be like, 'why do I like him?'" Kuperman adds. "You want to find someone you like as much as they like you. A lot of dating is cutting the shit and being true to yourself."

At this point it's a huge cliche to wonder how women "balance it all," but the reality is, balancing all the areas of one's life is hard—no matter what your gender identity is. And when career goals are top priority, friendship and family can fall by the wayside. This isn't a huge problem for the Betches considering they've been friends since middle school (as Abraham notes: "We'll be drinking at a bar and still be taking about work or a contract"), but still—remembering your loved ones is key.

"I put on my to do list 'call dad.' And then I called him," Kuperman. "You have to treat friends and family as something you should do, because otherwise you'll get lost in everything else—work, dating, whatever."

On that note, making a mental note to call literally everyone back.