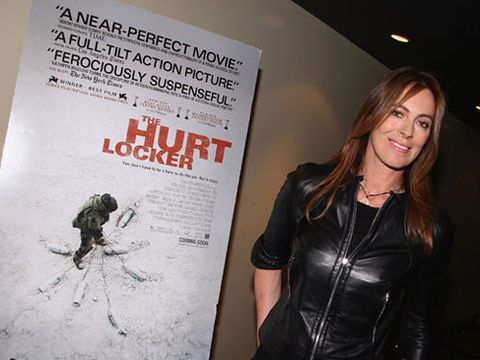 What's the toughest gig in the world? It has to be dismantling roadside bombs, before they blow up in your face. In her new nail-biter of a feature film, The Hurt Locker, director Kathyrn Bigelow tells the story of the heroic American soldiers who spend their days sneaking up on enemy bombs in Iraq, then disassembling them with their own hands. We asked Bigelow, director of ass-kicking action films like Point Break, Blue Steel, and Strange Days, what drew her to the bomb squad.

Q. Your films have run the gamut from bloody crime dramas to sci-fi thrillers. This film is more about psychological than physical action. What sparked this idea?

A. The screenwriter, Mark Boal, had been embedded with a bomb unit in Iraq as a journalist, and I was fascinated by his stories—by the idea that the bomb technicians are walking toward what everybody else is running away from. It's kind of an epic, lonely walk that only the man in the bomb suit performs. And he does it as many as 15 times a day. I wanted to do a character study of someone who volunteers for a job like that.

Q. Where does the film get its name?

A. The Army guys speak of explosions as putting you in "the hurt locker."

Q. You filmed in Jordan, near the Iraq border, in 120-degree heat. Sounds like hell...

A. Well, it certainly was prohibitively hot! But it was a kind of profound experience. I suppose we all sort of collectively swung for the fences. I had an incredibly dedicated cast of emerging talent and some seasoned pros, along with real Iraqi extras. It required extraordinary commitment on everyone's part—especially Jeremy Renner, who had to wear a real bomb suit that weighed anywhere from 80 to 100 pounds.

Q. A French friend who saw the film with me claimed it was "too American." In other words, the Americans looked good and the Iraqis, bad...

A. I like to think of the film at its best as reportorial, and that it's not there to judge. That's not my position. I tried to give a perspective—honest, accurate, and authentic.

Q. The characters in your movies tend to be pretty macho—bank robbers, surfer studs, cops, vampires—now bomb defusers. What gives?

A. I choose material instinctually—at the heart of it are characters that I feel are fresh and original, and allow for an opportunity to, I suppose, explore uncharted ground...

Q. Are you macho?

A. [Laughs] No, I actually started out as a painter; I was involved in the art world and eventually began to look at films as an artistic medium, as a canvas.

Q. What message do you hope your new film gets across?

A. These men are sort of the unsung heroes—they're highly underappreciated. What they do is key to this particular conflict, and I think it's an element of the military that the public knows fairly little about. I wanted to identify the price of their heroism—there is a cost to the courage. The job comes with a tremendous sense of purpose, but it almost ruins these guys for normal life.

Q. Yet the film suggests they enjoy it.

A. There's a book by Chris Hedges called War Is a Force That Gives Us Meaning, and it opens with a quote that says, essentially, war is a drug. I wanted to explore that idea, the notion that war's dirty little secret is that men like it.

Abigail Pesta Abigail Pesta is an award-winning journalist who has lived and worked around the world, from London to Hong Kong.
This content is created and maintained by a third party, and imported onto this page to help users provide their email addresses. You may be able to find more information about this and similar content at piano.io
Advertisement - Continue Reading Below
More From Money & Career
140,000 Jobs Were Lost In December—All Women's
Allison Statter Is More than Kim Kardashian’s BFF
Advertisement - Continue Reading Below
Questions to Ask During a Job Interview
The Woman Behind Thousands of Small Business Loans
Created for From Marie Claire for Created by Marie Claire for
Bank of America
You Can't Pick Produce on Zoom
How to Afford the Freelance Life
Freelance With Benefits? You Bet.
How to (Mentally) Make the Be-Your-Own-Boss Move
The Gray-Area Economy
Black Women Are Making Their Own Space In VC