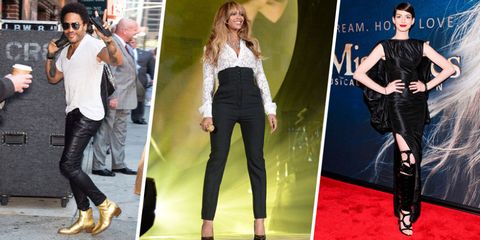 They get out of cars while not wearing underwear. You missed a deadline. They squat down too vigorously...while not wearing underwear. You blew chunks during a BFD client meeting. Are those things the same? Not exactly, but we can still learn a lot—about saving face, recovery, spinning the entire situation into a win—from famous people. Because what's actually worse: having to slowly regain your boss's trust? Or exposing your nether regions to the whole internet-accessing world?

Advertisement - Continue Reading Below
Beat everyone else to the punch
Getty

A student of the Fat Amy school of thought, Nicki Minaj just blurted out what everyone would eventually come to realize even before they came to realize it. At the 2014 VMAs, after her very body-con dress failed to hold up, she yelled "You all know I had a wardrobe malfunction" to reporters with a shrug, which is kind of a smart preemptive strike because then her people wouldn't have to deal with a bunch of reporters asking for a comment later. For us, this simply looks like going to your boss at the first signs of a problem/before a goody-two-shoes coworker can tell on you.

While Beyoncé's pose here does suggest that her blouse couldn't handle the excitement of being near Beyoncé, it also suggests humility, as in "I'm in this vulnerable position and I know I'm more at your mercy than usual." Post-f*ckup you will likely understand what it is like to be in a vulnerable position, so instead of scorning offers of help, however insincere they may be, stay humble and accept. At least until you're on top again.

On the other hand, it is really nice to not have to take the fall alone

Because Dior needs Jennifer Lawrence just as much as Jennifer Lawrence needs Dior, the maison stepped up to the plate when rumors that she had ripped her 2013 SAG Awards dress began to emerge. (A spokesperson confirmed to the Daily Mail that, no, it was just the construction of the dress—no rip.) No one really did anything wrong here, but they stuck together in their rightness, a technique you should try even if you're in the opposite situation. Did a colleague contribute to the f*cking-up but escape judgment? Nobody likes a snitch, but you could appeal to her conscience/Tell-Tale Heart her until she owns up, too.

But still own the sh*t out of it

Think about it: Boys adjust themselves in public all the time, so why can't we? Idina Menzel not only acknowledged the problem (one boob trying to escape its weird exposed cage) but she drew attention to it, and subsequently, her wit and realness. If you can joke about your own f*ckup, you've won.

*Really* own the sh*t out of it
Getty Images

Who do you think started #penisgate and thereby made himself a trending topic on all the social media platforms? (Yes: It's Lenny Kravitz.)

In a stroke of A1 media training, Anne Hathaway spun her would-be devastating crotch shot into a treatise on the commodification of women's bodies that somehow promoted her movie at the same time. Someone got a raise for this, and you will too once you figure out a way to spin your own f*ckup into a success story that highlights your talents and self-sacrificing nature.

Personally, if my work f*ckup were so unsalvageable that I had already started using my work computer to look for other opportunities, I would 1) stop doing that because we still have to preserve some of our dignity, okay? and 2) do the crazy, last-ditch thing that's been tickling the back of your head. If you've got nothing left to lose, might as well fail big, right? At least that's how I'd want to go out.