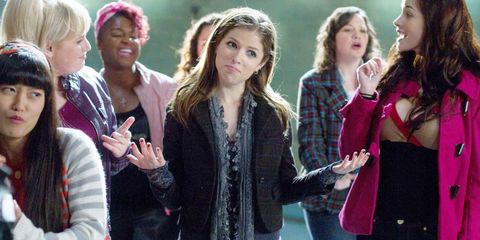 While Skylar Astin and Anna Kendrick play the movie's romantic leads, he and Anna Camp started dating on set. (They're still together and post cute Instas, like, all the time.)

Happy birthday to my lover, my best friend, my soulmate... @therealannacamp you have changed my life, I love you so 🌹

Did you know Kristen Wiig was supposed to be in the movie? It's true: The role of Gail (one of the announcers) was written for her, but she had to decline due to scheduling conflicts. Elizabeth Banks, actress and producer on the film, eventually took the role.

Speaking of, Elizabeth Banks and John Michael Higgins (the male announcer) filmed their scenes in one day.

The duo based their performances off of John Michael Higgins' announcer character in Best in Show, a cult-favorite comedy about a prestigious dog show. In fact, Rebel Wilsons' parents are professional dog handlers, and even Rebel got into it when she was younger, working as a junior handler, which, according to her, "is kind of like Toddlers & Tiaras 'cause you are dressed up in little outfits, and you run around with the dogs and show them."

Rebel Wilson improvised most of her lines. That entire quasi-relationship/sexual tension storyline between Bumper and Fat Amy? Completely spontaneous.

Anna Kendrick admitted she learned her audition song from a viral video by Lulu and the Lampshades, which was incorporated into the movie since the producers liked it so much. It climbed to number 6 on the Billboard Hot 100.

Adam Devine (AKA Bumper) accidentally hit one of the cameramen with a burrito for *that* scene.

There's actually an error in the movie—Beca AKA Anna Kendrick explains that Vader means "father" in German, but it doesn't—it does in Netherlands Dutch. In the German film this was changed to say "Netherlands Dutch" in that scene.

The Best Looks from the 'Pitch Perfect 2' Press Tour