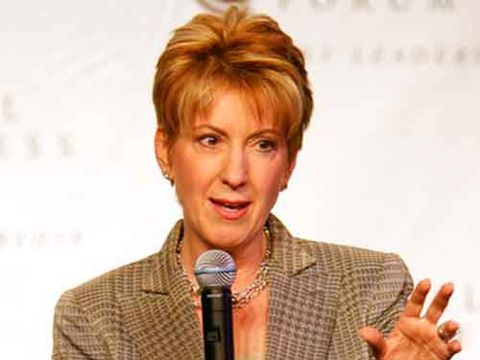 Q: WHEN HP WANTED TO DUMP ITS CHAIRWOMAN, PATRICIA DUNN, IN SEPTEMBER, IT ANNOUNCED THAT SHE WAS "STEPPING DOWN." YOU COULD HAVE SAID THE SAME. INSTEAD, YOU SAID, "I GOT FIRED BY THE BOARD OF DIRECTORS."

A: Because that was the truth. I don't give up on commitments until what I've been asked to do is clearly finished. For me to have stood up and said "I've chosen to leave" would have been a lie, but it also would have been inconsistent with things I'd said before. I didn't fail; I was fired. And there's a difference. I think it was disproportionate that my firing got more press than Dennis Kozlowski, Ken Lay, and Bernie Ebbers combined; Adelphia and John Rigas combined. But look, I remain at peace about the choices I made and their consequences. My soul is my own; I don't feel like a victim.

Q: YOU WALKED INTO THE BOARDROOM, AND ONLY TWO PEOPLE WERE PRESENT--EVERYBODY ELSE HAD FLED!

A: After I had worked so hard, there was no explanation, no thank you, no good-bye. Watching it play out in public was difficult. There was a lot of, "Well gosh, she got fired. She must have done something wrong." When it became clear that it wasn't fraud or scandal or dishonesty, and it wasn't bad results, then the discussion shifted to, "Well, it must be her style, it must be her personality, it must be something."

Q: WAS THE FALLOUT HARDER THAN IF YOU'D BEEN A MAN?

Q: THE STORIES WERE THAT YOU TRAVELED WITH AN ENTOURAGE, INCLUDING A HAIRDRESSER.

A: A hairdresser, a makeup artist--these were all routinely reported, and all absolutely false. It just made a good story. Virtually every CEO has access to a company plane, including all of my predecessors at HP, but the fact that men fly on company planes is never commented on. The fact that I did was a major story. What's that about?

Q: WELL, WHAT ISTHAT ABOUT?

A: People who don't fit the mold are treated differently than those who do. You have to define for yourself whom you choose to be. If that makes other people uncomfortable, so be it; it's their problem. It can't be your problem.

Q: WHAT DOES IT FEEL LIKE TO ACTUALLY GET FIRED?

A: The sensation of getting fired was one of disappointment. I was disappointed in the way people chose to behave. The press coverage was painful--and incredibly personal! "She's too ambitious, so she didn't have children"--I mean, very personal comments that hurt me, hurt my husband, hurt my family. I always thought that business was about results, but a lot of the business coverage is about personality, style, motivation, whatever. It's a soap opera, right?

Q: WERE YOU DEPRESSED AFTERWARD?

A: Some days, sure. I don't have them anymore, but there were days in that first six months where it was like, "OK, let's go to the box of chocolates!" you know, I'd devoted my life to a group of people, and so there were days when I missed them terribly.

Q: DO YOU ENCOURAGE WOMEN TO BE "ONE OF THE GUYS" OR TO BRING THEIR FEMINIITY TO THE JOB?

A: I love being a woman. I like dressing up; I love buying shoes. If the media comments on my shoes, so be it. But sometimes, you have to meet people where they are. When you're with a bunch of guys--and I've spent most of my career with a bunch of guys--you have to talk with them in language they understand. In one case, when I was working with an all-male, macho sales force, I literally did a parody and stuffed socks in my pants and talked to them about "my you-know-what's as big as yours." They got the point.

Q: WHAT HOLDS WOMEN BACK IN BUSINESS?

A: One of the greatest issues women have is lack of self-confidence. And yet, it's also true that when a woman exhibits boldness, people take note in a way that's different than what happens when a man is bold. A woman has to decide, "Am I going to be the way I want to be, or am I going to be the way other people are more comfortable with me being?"

Q: DID YOU EVER DOUBT YOURSELF?

A: What I've felt a lot during my career is fear. My first fear was, "I can't do it." As an account executive in sales school at AT&T, my first assignment was to role play a conversation with a secretary. The secretary was acting as the gatekeeper to a client, and you had to convince the gatekeeper to let you talk to the client. Simple, right? I was petrified! I mean, I was a great student; I got straight A's. But I had never done this before. I just sat there. I was afraid to fail, so I was afraid to try. I think women fear failure more than men do.

Q: TODAY, DO YOU OWN UP TO BEING AFRAID?

A: Absolutely. Courage is not the absence of fear; courage is the ability to overcome fear and move forward. I've done many things in my career that I had never done before: mergers, an IPO, a proxy battle, being a CEO. We're all afraid! The question is, does it stop you, or do you still do the best you can?

Q: ARE YOU A SAVER OR A SPENDER?

A: Definitely a spender! My husband is a saver; I spend on myself, my family, I give it away, I invest it. I don't like to just look at money and say, "Gee, there it is." I want to do something with it.

Q: WHAT IS IT LIKE, GOING FROM AN INCREDIBLY PUBLIC LIFE TO A MORE PRIVATE ONE? DO YOU EVER FIND YOURSELF THINKING, MY GOD, WHAT DO I DO?

A: Not exactly. The pace that I was keeping, you're never getting enough sleep. You're kind of on the move all the time. And you're running on adrenaline, so when that stops, it's like getting off a drug. You definitely have moments of anxiety. It's an odd feeling to realize that if I don't want to do something, I don't have to. The next month is not scheduled for me in advance. The next month will be only what I choose it to be. I think some people actually get very afraid of that.

Q: WHAT HAS YOUR EXPERIENCE TAUGHT YOU?