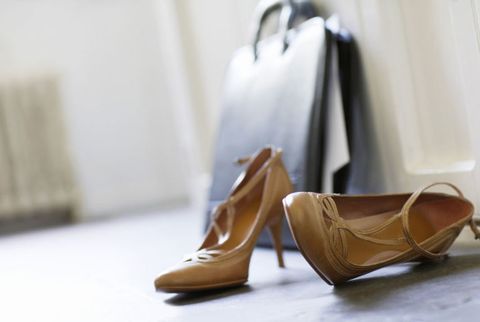 A few years ago, I thought I'd practically hit the Powerball jackpot when I moved into an apartment right near my office. How much better would life be now that I could transition from cubicle to couch in six minutes flat? I envisioned all the money I'd save scampering home for lunch, all the stress I'd be spared now that my morning commute consisted of a brisk walk. But just weeks after I moved in, a very different scenario emerged: I noticed that most evenings I was jumpy and preoccupied; when my friends came over for dinner, I checked the clock like I was on a lunch break, the weight of my empty desk chair looming down the block.

The next year, looking for more space, I moved to an apartment about a half-hour train ride from the office. I was already spoiled by then and felt certain that the trip to and from work would obliterate my weeknights. In fact, the opposite happened. As unlikely as it sounds to anyone who's suffered through 45 minutes of gridlock, a commute can actually be a good thing. On the ride home, I'd pop in my earbuds and listen to a comedy podcast while flipping through a fashion magazine. The ritual helped me disengage from work—by the time I got home, the night felt truly mine.

There's nothing quite like that period when the workday is done, racing home to unwind with the Real Housewives or dashing off to cocktails with friends. Only, it rarely works out that way. In order to prove just how indispensable we are, we implicitly promise to always be available—it's one of the unintended consequences of the professional inroads women have logged in recent years. Not surprisingly, this 24/7 mentality has had an insidious effect on our personal lives, sparking blowups with spouses and kids and infiltrating, even sabotaging, some of our most intimate moments.

Of course, the recession shares some of the blame, too, forcing everyone to work longer and harder for less. And with job security an anachronism, the pressure to deliver has never been greater. As a result, we've become a nation of raging workaholics: Nearly 30 percent of Americans will check in with the office while on vacation this year, according to a survey by CareerBuilder; more than 40 percent lie awake at night worrying about, among other things, work and money.

"You have to decompress," says Dr. Christina Maslach, a psychology professor at the University of California, Berkeley, and coauthor of Banishing Burnout: Six Strategies for Improving Your Relationship With Work. "In general, people who cannot get away from their job, who endlessly think about it, don't have friendships and are much more at risk for stress and burnout."

The problem, of course, is that as our work lives have become more demanding and all-consuming, those traditional methods of relaxing—a 30-minute jog, a glass of whatever—just don't seem to cut it anymore. In major cities like Los Angeles, Chicago, New York, and Miami, women are ditching the treadmill in favor of hard-core drench-inducers like Spinning, Ironman training, and ultra-conditioning programs such as CrossFit. We're also running more half-marathons and marathons than ever before and competing in more women-only races that cater to our growing numbers.

"I just need to feel like I can kick some ass, and then I can move on with my day," says Jess Dove, 30, a teacher in Fairfax, Virginia. Before her husband, a tech consultant, gets home from work, Dove either takes a kickboxing class or hits an intense three-mile trail run. The bruising workout restores her confidence and reminds Dove that even when she's taking a shellacking at work--dealing with overcrowded classrooms, difficult parents, and tightening budgets—she's still tough enough to go back for more. She returns home whole again, and mentally equipped to talk to her husband about other things.

"You don't want to relive the negative aspects of your job with other people—nobody really wants to hear it. It's alienating and cuts into your time to do truly fulfilling things," says Maslach. "The goal isn't just to transition physically, but mentally, too." Be good to yourself, she advises—part of why it's so difficult to detach is because we are constantly on-call for other people. Focus on something besides the workday grind--like, for example, that class you're debating whether to splurge on. (Consider it a career investment.)

Ask around and you'll no doubt hear about women finding relief in all sorts of activities, some more questionable than others. "For me, I just need something immediate that's going to take the edge off," says Marnie Gorham, 33, a Los Angeles-based nonprofit marketing exec who smokes pot virtually every night. Just a quick hit, she says, so she can leave behind a long day typically spent wrestling with a meager budget and bureaucratic red tape. Unlike wine, which sometimes leaves her hungover and bloated, pot offers instant relaxation with fewer side effects. "I can't check my work at the door and move on with my night unless I've had some. It's the perfect stress reliever."

Of course, there are less extreme rituals that will do the trick. Wendi Hausfeld-Carragher, 30, a senior health consultant in Washington, D.C., jumps in the shower within five minutes of returning home and spends the next 20 minutes gloriously silent. No chitchat with her husband, no BlackBerry pings. "I rinse off all my makeup and exfoliate my skin—I'm scrubbing the day off," she says. Then she changes into comfy pajamas, no matter if it's hours before bedtime. Meanwhile, her husband, Stuart, a personal trainer, has his own after-work routine, browsing motorcycles on eBay and real estate on Craigslist. "Stuart distances himself from the day's stress by thinking about a future where we live a more exciting life somewhere else. For me, it's about stop-ping the clock and feeling comfortable right now," Hausfeld-Carragher says. "Once we both do our own thing, we get along sooo much better."

We want to know what you think about MC@Work. Click here to tell us!

This content is created and maintained by a third party, and imported onto this page to help users provide their email addresses. You may be able to find more information about this and similar content at piano.io
Advertisement - Continue Reading Below
More From Money & Career
How to Afford the Freelance Life
Freelance With Benefits? You Bet.
Advertisement - Continue Reading Below
How to (Mentally) Make the Be-Your-Own-Boss Move
The Gray-Area Economy
Black Women Are Making Their Own Space In VC
3 WFH Tips For Small Business Owners
Created for From Marie Claire for Created by Marie Claire for
Bank of America
The Best Finance Podcasts Out There
The Big Business of Activism
How the WNBA Pulled Off a Slam-Dunk Season
What Happened at Marie Claire's Power On Event