After spending the past week being completely inseparable, it appears as thought Justin Bieber and Selena Gomez are *officially* in a relationship—just days after Selena's split from The Weeknd went public.

Related Story
The Weeknd Is Truly Unfazed by His Selena Split

TMZ reports that the pair are "full on back together" thanks to Bieber pursuing Selena, while Us Weekly also confirms the news. "Selena and The Weeknd just fizzled and ended amicably," the outlet's source reports. "It wasn’t dramatic and it wasn’t about Justin. But Selena always had feelings for Justin. Her friends want her to be cautious because she has been in such a good place post-surgery."

According to TMZ, Selena's family are "adamantly against" her getting back together with Justin, called him "vile," and have blamed him for Selena's previous issues with depression.

Obviously, the heart wants what it wants. 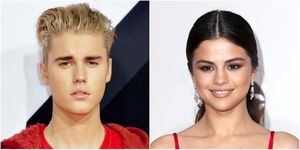 Selena Gomez Cheers on Justin Bieber at Game
Mehera Bonner Contributor Mehera Bonner is a news writer who focuses on celebrities and royals—follow her on Instagram.
Advertisement - Continue Reading Below
More From Celebrity