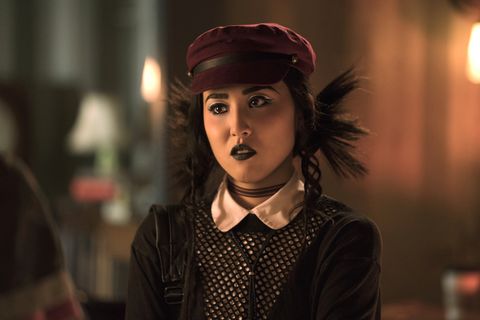 Every year, we *think* we've reached peak superhero saturation, and then the universe delivers. Or rather, the Marvel Cinematic Universe and the DC Universe delivers. In 2017 alone, we were gifted Wonder Woman (a true bright spot in a dark year for women), a new Spiderman movie that was *so* much better than everything that came before it, and Justice League—which, actually, was pretty terrible, so let's just forget all about it.

"We have this wonderful chance to show that women aren't just accessories for men on shows, and aren't just love interests."

But we also got Marvel's Runaways, a new Hulu show that exists in the MCU and has the benefit of being grounded in real life—despite all the superpowers. The kids in Runaways (helpfully known as "the Runaways") might have cool talents at their disposal, but they're also regular teens dealing with regular teen issues—like social hierarchies, being a minority in a mostly white town, having parents that completely don't get them, or being attracted to their best friend. The show is packed with new talent, but actress Lyrica Okano—who plays Nico— had perhaps the most interesting storyline of the season: The death of Nico's sister is the catalyst for the events in the show, her beauty and fashion look are a true reflection of her inner turmoil, and she starts off in a romantic relationship with a guy, only to subvert audience expectations by falling for her best girlfriend. MarieClaire.com spoke to Okano about all of the above—and what's in store for next season.

On the inspiration behind Nico's unbelievably stunning beauty and fashion looks:

"When I was working with Joni Powell from makeup, we saw a picture of a woman in Harajuku—and it was the way she put on her blush, starting under her eye, and expanding to her cheekbones...we thought it was so cool, and were like we definitely should have that as Nico's look. The whole process of making Nico look the way she looks was about two hours every morning because it was so specific. With wardrobe, it never came down to my decision, but I'd pose the hardest for the one outfit I really wanted."

On whether we'll see *actual* magic on the show, or whether Marvel will stick with the science vibes:

"I have no idea what to expect from Season 2, but I definitely hope Nico's powers will expand. The whole idea of Nico starting out as this budding Wiccan was exciting for me, but this is Marvel and they do like to keep things grounded—so I understand why they made the decision to have it be more about science than supernatural powers. But I'm always down for a little bit of magic."

On a potential crossovers in the Marvel Cinematic Universe:

"I kept asking our showrunners Josh Schwartz and Stephanie Savage if there will be a crossover, and they've been very clear on keeping secrets. Cloak & Dagger is also a show about teenagers that also have powers, so it would make sense to cross over with them. I love Jessica Jones personally, but it's Netflix, so I have no idea how that would work! But because Runaways takes place in L.A. we're a bit more isolated from the other movies and shows which take place in New York."

On Nico and Karolina's relationship being a great moment for LGBTQ representation:

"Jenny [Karolina] and I followed the comic books and knew exactly how Karolina's story goes, and how Nico plays into that. We've been very enthusiastic about how our relationship will go on in this journey. We've been pushing for it. By episode 10, you really see that Karolina and Nico do have a special connection, and that Nico is very much ready to explore their relationship together. It's a beautiful thing and we feel so honored that we could showcase that on the show. I'm so happy about them—they're end game."

On shows marketed towards younger viewers doing a way better job with diversity and inclusion:

"I play a teenager on the show, but I will say that I'm no longer a teenager in real life—it's been a few years. But when I look back on when I was a teenager myself and I was going through a lot of things, I kept thinking, 'I wish I had someone, a superhero, who looked like me to look up to.' Our show is so diverse and all the stories are so different—and it's exactly what everyone needs, not just teenagers watching the show, but adults."

How the politically tense time we live in effects the roles she picks:

"Playing a strong female lead on a female-centric show is a huge deal, especially because of the political climate right now, and things that have come up in our industry recently. I always felt that pressure to do it right, because young girls out there are going to be watching the show, and we have this wonderful chance to show that women aren't just accessories for men on shows, and aren't just love interests. We have are own motives, and we have our own voices, and they can be heard."

On what we can expect from Season 2:

"I really do not know! I know a few rumors but I'm not sure I can say. I don't think Marvel will be very happy with me if I reveal them. I think Season 1 focuses on our backstories and takes on Volume One of the comics until the runaways actually runaway. I think season 2 picks up from once we do runaway, and what really happens."

Marvel's Runaways is currently streaming in its entirety on Hulu.