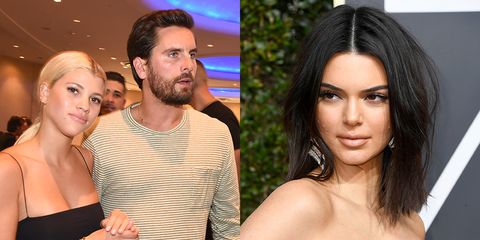 Scott Disick and Sofia Richie are a ~thing~. They're an Instagram official, kissing-in-public, confirmed-relationship THING.

Here they are, canoodling in a picture on Richie's Instagram:

And here they are, kissing for the cameras at Sugar Factory in Miami, Florida:

The point is that the couple, who used to insist they were just "homies," aren't hiding their love from anyone anymore. And now, that includes Scott's kids. They recently took a step even bigger than going Instagram official or kissing in public—they went out as a family with Mason, Penelope, and Reign.

A Scott Disick fan account (yes, those exist) posted a paparazzi picture from the outing on Instagram, and the picture shows Sofia and Scott in the front seat of a car with the kids in the back.

The real magic happened in the comments though. Kendall Jenner, half-sister of Scott's ex and baby mama, Kourtney Kardashian, left a comment that is so shady, your body temperature will drop just reading it.

As ET Online reports, Kendall commented, "aww scott and his kids," along with a laughing emoji. The comment seems to be a dig at the couple's age difference (Scott is 34 and Sofia is 19).

Kourtney has yet to comment on the relationship and Sofia hasn't made an appearance on Keeping Up With the Kardashians yet (so, you know, there are still relationship milestones to be had for the couple). Scott and Sofia went public with their relationship in December and were first spotted together in Cannes over the summer.

Kayleigh Roberts Contributor Kayleigh Roberts is the weekend editor at Marie Claire, covering celebrity and entertainment news, from actual royals like Kate Middleton and Meghan Markle to Hollywood royalty, like Katie Holmes and Chrissy Teigen.
This content is created and maintained by a third party, and imported onto this page to help users provide their email addresses. You may be able to find more information about this and similar content at piano.io
Advertisement - Continue Reading Below
More From Celebrity
Prince William Mentioned Harry By Name, Finally
Republicans Want Meghan Markle Stripped of Title
Advertisement - Continue Reading Below
Princess Diana Would Be "Horrified" By Portrayals
The Cambridges Head Out on Vacation
Spice Girls Reunion Tour Might Feature Posh Spice
Prince Charles' Revealing Joke About the Throne
Some People Think Prince Harry Sounds American Now
Prince Charles May Make Buckingham Palace a Museum
Chrissy's Daughter Luna Is Learning to Read
The Queen Spent a Night in Hospital