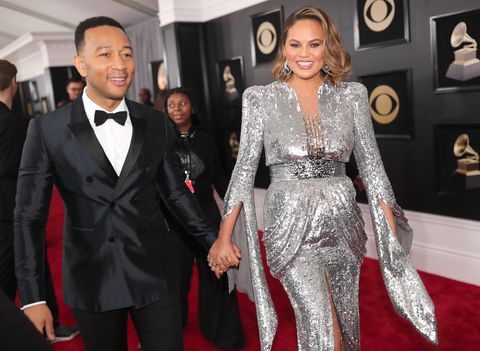 Chrissy Teigen and John Legend stepped out on the 2018 Grammy Awards carpet (joined by Chrissy's growing baby bump), and they were characteristically candid.

During a delightfully awkward interview with Ryan Seacrest, the couple opened up about their recent toilet struggles. On Wednesday, Chrissy tweeted about running home to pee—only to find her toilet missing.

I got home today and ran to go peepee and you know when you’re so close to the bathroom so you kind of release because you know you’re about to pee, well I did that and my toilet was gone.

Chrissy opened up about an accident she had because, well, she's Chrissy Teigen, Czar of Honesty and Truth-Telling: "I thought, Of course this would happen to me, and I peed."

Chrissy's husband, John, explained where the toilet went—the couple were in the midst of having a new Japanese toilet with a bidet installed. The new toilet, as John explained, "washes your butt."

So, yep, that was Chrissy Teigen and John Legend, talking about pants-peeing and butt-washing at a red carpet event for our entertainment.

Kayleigh Roberts Contributor Kayleigh Roberts is the weekend editor at Marie Claire, covering celebrity and entertainment news, from actual royals like Kate Middleton and Meghan Markle to Hollywood royalty, like Katie Holmes and Chrissy Teigen.
Advertisement - Continue Reading Below
More From The Grammys 2020
How to Get Demi Lovato's Look From the Grammys
Go Bold or Go Home Was the Grammys' Nail Vibe
Advertisement - Continue Reading Below
Why Isn't Beyonce at the 2020 Grammys?
Watch Demi Lovato's Emotional Grammys Performance
Alicia Keys' No-Makeup Look at the Grammys Is Gorg
Alicia Keys Covers 'Someone You Loved'
Priyanka Chopra Pays Tribute to Kobe at Grammys
Lizzo Opens the Grammys With an Epic Performance
Sophie Turner Stuns In a Gothic Look
Ariana Grande Is a Disney Princess at the Grammys