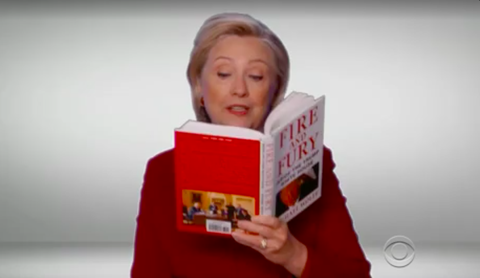 You don't need to be a musician to win a Grammy—hell, Barack Obama, Bill Clinton, and Hillary Clinton all have Grammys. For years the recording academy has honored the "Best Spoken Word Album" for those ever-so inspirational speeches.

And host of tonight's award show, James Corden, is already expecting Donald Trump to be part of next year's prize.

"We know that our current president does love winning awards, and the good news for him is he might just be the subject of next years' winner," Corden said.

In this hilarious segment from Corden, celebrities audition to narrate the book Fire and Fury by Michael Wolff. Be sure to scroll all the way to the end for a surprise orator.

And the "audition" that mattered the most...

Most of Twitter found the bit to be one of the show's better moments, but U.N. Ambassador Nikki Haley was less than enthused.

I have always loved the Grammys but to have artists read the Fire and Fury book killed it. Don’t ruin great music with trash. Some of us love music without the politics thrown in it.

Maybe someone should remind her of all the political statements artists have made with their music?

More from the 2018 Grammys
Kesha Honored the #MeToo Movement at the Grammys
Beyoncé and Jay-Z Are #Goals at the 2018 Grammys
Alex Warner
This content is created and maintained by a third party, and imported onto this page to help users provide their email addresses. You may be able to find more information about this and similar content at piano.io
Advertisement - Continue Reading Below
More From The Grammys 2021
Megan Thee Stallion, Cardi B Stole the Show
Taylor Thanked Joe During Her Grammys Speech
Advertisement - Continue Reading Below
Beyoncé Is the Winningest Woman in Grammys History
Watch Dua Lipa's 2021 Grammys Performance
Billie Eilish, Harry Styles React to Each Other
The Best Twitter Reactions to the 2021 Grammys
Megan Thee Stallion Frosts Herself in 222 Carats
The Best Red Carpet Looks at the 2021 Grammys
What to Expect From the Grammys This Year
How to Get Demi Lovato's Look From the Grammys