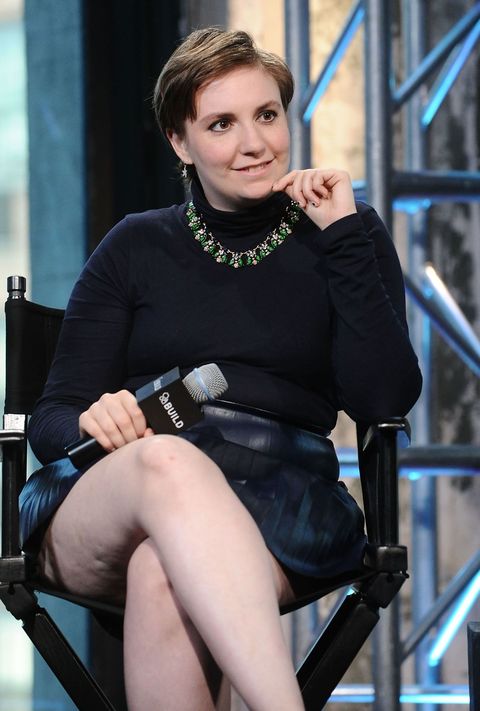 Much like Brangelina, proud LGBT supporter Lena Dunham once vowed that she and her boyfriend, Jack Antonoff, would hold off on getting married until gay marriage was made legal in all 50 states. Well, now that same sex couples are free to tie the knot across America, we—along with Ellen Degeneres—can't help but wonder: "Where's your ring?"

When asked about her current plans to walk down the aisle, Dunham openly admitted that she has none—because she and Antonoff are nowhere near ready to become husband and wife (regardless of the Supreme Court's ruling).

"So it was funny," she said during a Friday appearance on Ellen. "The day that gay marriage became legal across this country, we were thrilled, we were celebrating. And suddenly, the texts just started coming from our friends, from our mothers, from our exercise instructors being like, 'Finally, it's your time!'"

And that's when the pressure started to kick in: "We kind of looked at each other and were like, 'Oh God, what have we done?!'" she explained. "I'm excited to marry him at some point, but it just felt like a lot to just go for it that day."

Plus, Dunham doesn't want her nuptials to be upstaged by the "gay people [who] are kind of killing it at weddings right now." "I feel intimidated," she revealed. "They're kind of winning at weddings. So, I don't want to go in and just pale in comparison."

Even with assurance from Degeneres that her ceremony will be a "cool" and "amazing" one, the Girls star isn't so sure. "I have a lot of big ideas which I share with Jack as he's falling asleep," she lamented. "And he goes, 'Maybe we can talk about it tomorrow...or in five or six years.'"

This content is imported from Third party. You may be able to find the same content in another format, or you may be able to find more information, at their web site.
This content is created and maintained by a third party, and imported onto this page to help users provide their email addresses. You may be able to find more information about this and similar content at piano.io
Advertisement - Continue Reading Below
More From Celebrity
Royal Family Shares Rare Photo of Prince Philip
Chloe From 'Too Hot to Handle' Is in 'The Circle'
Advertisement - Continue Reading Below
There's Drama Over Prince Harry's Funeral Attire
Jennifer's Rep Breaks Silence on Adoption Story
Princess Eugenie's Prince Philip Tribute
Serena Williams Signed a Major TV Deal With Amazon
Chrissy Wrote Luna the Sweetest Birthday Message
Prince Harry Has Met Princess Eugenie's Son August
The Queen Returns to Work After Philip's Death
A Brief History Lesson on Brad and Jen