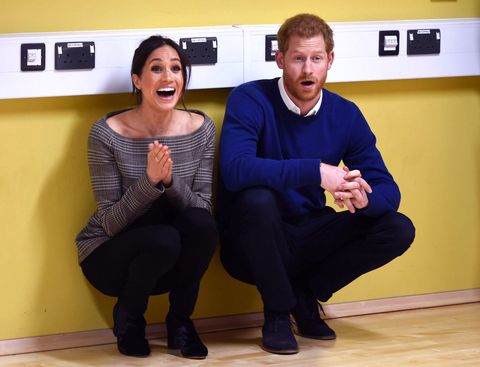 Lifetime just recently announced that they were working on a movie all about Prince Harry and Meghan Markle. And it looks like things have started quickly, with the actress playing Markle sharing a photo from the set that may raise some eyebrows at Buckingham Palace.

Staring Parisa Fitz-Henley as Meghan and Murray Fraser as Harry, Harry & Meghan: A Royal Romance is set to follow the couple from the moment they met, through the time where they could keep their relationship secret, and until they became one of the most public couples on Earth, according to a Lifetime press release.

And it looks like the movie won’t shy away from the, well, intimate moments of their relationship. On Thursday, Fitz-Henley posted a photo of herself on day one of production, with Fraser in bed together. Scandalous!

“Sweet dreams to you,” she wrote on Instagram. “Love, #HarryandMeghan.”

This isn’t the first royal couple to get the TV-movie treatment, whether they like it or not. Lifetime already aired William & Kate, the Movie, and the Hallmark Channel followed it with William and Catherine: A Royal Romance. So here’s betting there will be even more Meghan and Harry movies to come before their wedding day in May.