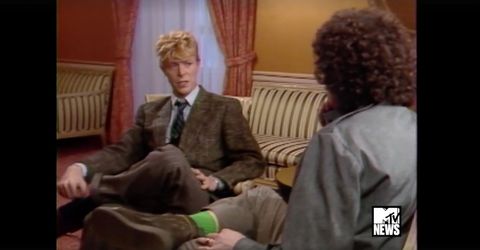 David Bowie, who died Sunday at 69 after battling cancer, was constantly ahead of his time, on basically any issue. As fans began to mourn the legendary performer, they started sharing evidence of his progressive thinking and unstoppable creativity. MTV even shared a video from 1983 that made itself look bad—but showed just how comfortable Bowie was speaking truth to power.

"I'm just floored by the fact that there's so few black artists featured on it. Why is that?"

In the clip, Bowie asks interviewer Mark Goodman why the relatively new station doesn't showcase many black artists. "It occurred to me, having watched MTV over the past few months, that it's a solid enterprise and it's got a lot going for it," he said. "I'm just floored by the fact that there's so few black artists featured on it. Why is that?"

Bowie wasn't having it, saying MTV only features black artists in the wee hours of the morning, not during the day when most people are watching. Goodman, having to speak for the network, tried to defend the company by saying many white viewers were uncomfortable with black musicians and their music videos. "Do you not find that it's a frightening predicament to be here?" Bowie asked. "Is it not possible that it should be a conviction of the station, and of other radio stations, to be fair? It does seem to be rampant through American media. Should it not be a challenge to try and make the media far more integrated, especially of anything in musical terms?"

Entertainment Weekly notes that that very year, MTV started playing Michael Jackson's "Billie Jean," the first video by a black artist to be frequently aired on the network. Goodman hasn't commented on the newly viral interview, though he did tweet a mournful message about Bowie. He now hosts several shows on Sirius XM radio.