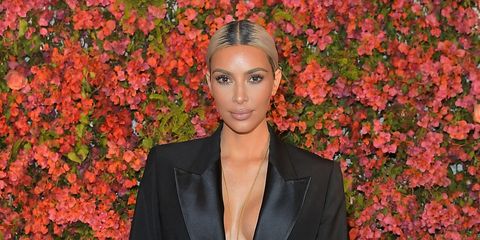 In last night's Keeping Up With the Kardashians season finale, Kim Kardashian West introduced someone extremely important to the rest of her family.

The episode, which also showed a pregnant Kylie Jenner, involved a special meeting between Kim and Kanye's surrogate and the rest of the Kardashian-Jenner clan.

Lorena, who carried baby Chicago West for Kim and Kanye, kept her face off-camera the entire time, but she can be heard speaking to the family. Kim has spoken at length about wanting to keep the identity of her surrogate confidential, so as to protect her privacy.

Kim's surrogate revealed on last night's episode that she, "like[s] being pregnant. I know it sounds really weird. The pregnancy itself, you know, it just feels natural, like I’m supposed to do it."

There's also an adorable moment when Lorena is chatting to Kylie Jenner and Khloe Kardashian, who are both also pregnant.

Kim elaborated on her surrogate's pregnancy too, saying, "I didn’t really know what to expect because I don’t really know anyone that’s gone through this. It was definitely not as easy as I thought it would be emotionally, but it’s so worth it and our surrogate is such a nice person. My family absolutely loves her and I’m just so grateful."

She also tweeted about her surrogate while the episode was on air:

I was so excited for my family to meet my surrogate ❤️She’s the best!

Kim's third baby, Chicago West, was born on January 15, 2018. According to Us Weekly, "Kim’s a very hands-on mom. Baby is settling in beautifully. Chi is sleeping a ton for now."

Amy Mackelden Amy Mackelden is a freelance writer, editor, and disability activist.
This content is created and maintained by a third party, and imported onto this page to help users provide their email addresses. You may be able to find more information about this and similar content at piano.io
Advertisement - Continue Reading Below
More From Celebrity
Charles Is Reportedly “Aggrieved” With Harry
Adele Stuns in Rare Birthday Photo Dump
Advertisement - Continue Reading Below
Serena and Olympia Twinned in Swimsuits Again
Joe Jonas Opens Up About Parenting Daughter Willa
Kourtney & Travis Have Talked About Marriage
Meghan's Author Bio Includes the Sweetest Detail
46 Moments That Changed the Royal Family Forever
Chloe From 'Too Hot to Handle' Is in 'The Circle'
Why Meghan Wasn't at the Vax Live Concert
A TikToker Went Viral for Un-Matching Ben Affleck