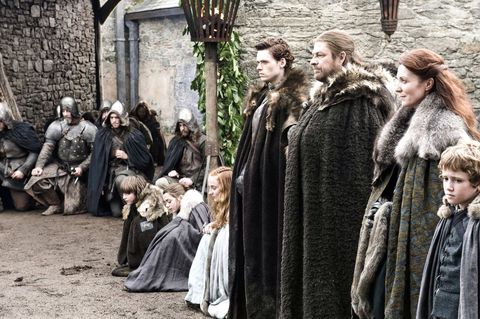 This post contains spoilers for people are very, very behind on Game of Thrones.

Game of Thrones proved early on that it was not afraid of shocking deaths—beginning with Ned Stark in Season 1, episode 9. Sean Bean, who played the Stark family patriarch/OG King of the North, was billed as the series' star and was the heart and soul of the show. And then his head was detached from his body and he was super, super dead.

The death was so shocking that even now, seven seasons later, we still reference it as one of Thrones' most OMG moments. And Ned's presence is still felt (and regularly referenced) even now on the show.

In an interview with Huffington Post, Bean discussed his now-iconic character and the impact he's still having on Game of Thrones even though he's been gone for years.

"He was such a fantastic character to play. He was one of the very few good men with principles and morals and values in the whole thing, because everybody’s backstabbing and poisonous people," Bean said of Ned. "He was an anchor to a lot of people, and of goodness...I was just glad to play Ned Stark. I’m very proud of it."

That is all very accurate. Almost everyone on Game of Thrones is a pretty terrible, conniving, and/or power-hungry person. Ned was a rare exception to this rule.

The actor's impact is also still felt behind the scenes. He revealed that he established the accent of the North and that every actor playing a Northerner now has to copy it, long after Ned and Sean are gone.

"We were doing the [pilot] read-through and the producers and the writers said, 'Why don’t you just keep your own accent?' And I said, 'All right! Good for me,'" he said during a Build Series interview.. "But then, everybody else had to do the same accent [as] me from the Stark family. So I established the way we speak."

"That set the tone for I guess the next seven seasons," he later explained to the Huffington Post. "They all had to talk like me."

Bean also weighed in on who he would pick for the Iron Throne, although he admitted he stopped watching the show after his character died in the ninth episode.

"I think Jon Snow would be a good choice [for the Iron Throne]," he said.

Kayleigh Roberts Contributor Kayleigh Roberts is the weekend editor at Marie Claire, covering celebrity and entertainment news, from actual royals like Kate Middleton and Meghan Markle to Hollywood royalty, like Katie Holmes and Chrissy Teigen.
This content is created and maintained by a third party, and imported onto this page to help users provide their email addresses. You may be able to find more information about this and similar content at piano.io
Advertisement - Continue Reading Below
More From Celebrity
William Will Suffer "Worst" from Harry's Memoir
Simone's Boyfriend Sent Her the Sweetest Message
Advertisement - Continue Reading Below
Harry's Friends Don't Want to Be in His Memoir
Will & Kate's Modern Approach to Raising George
Meet Simone Biles's Super Supportive Parents
What Happens on Katie's Season?
Bennifer Recreated Their 2002 PDA Moment
Why Harry's Memoir Release Date Has Upset People
The Royals Are Worried About Prince Harry's Memoir
Gabrielle Union Debuted a New, Short Haircut