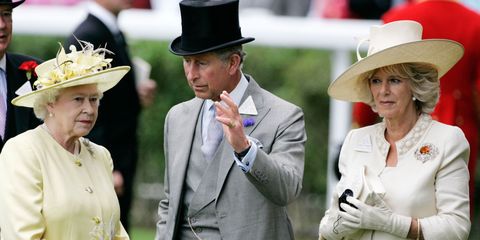 According to a scandalous new biography about Prince Charles, Queen Elizabeth II was not a fan of her son's wife, the Duchess of Cornwall, for the longest time.

Related Story
An Obsessive Timeline of Harry and Meghan

Prince Charles and Camilla Parker Bowles famously conducted an affair while Charles was still married to Princess Diana. Following his divorce, Prince Charles began seeing Camilla again, but apparently the Queen was not, shall we say, here for it.

As Tom Bower writes in his new book (via Daily Mail), Rebel Prince: The Power and Passion and Defiance of Prince Charles, apparently Queen Elizabeth II had been drinking "several martinis" when she told her son that "she would not condone his adultery, nor forgive Camilla for not leaving Charles alone to allow his marriage to recover."

And she didn't stop there. Bower alleges (via People) that the Queen even went so far as to call Camilla, "that wicked woman," and reiterated her feelings by announcing, "I want nothing to do with her."

Even though the Duchess of Cornwall is now an accepted part of the British royal family, it's clear that Prince Charles' relationship with her took a long time to find acceptance.

Despite finally getting married in 2005, People notes that because of how their relationship started, and the fact that "their affair had been a factor in the breakup of both of their marriages, they were not permitted to marry in the Church of England, so instead they wed formally in Windsor Town Hall."

Ultimately, though, their marriage was blessed at St. George’s Chapel in Windsor Castle, which is where Prince Harry and Meghan Markle will wed on May 19, 2018.

Related Story
Your Official Guide to Meghan and Harry's Wedding
Amy Mackelden Amy Mackelden is a freelance writer, editor, and disability activist.
This content is created and maintained by a third party, and imported onto this page to help users provide their email addresses. You may be able to find more information about this and similar content at piano.io
Advertisement - Continue Reading Below
More From The Ultimate Guide to the Royal Family
Harry & William Won't See Eye-to-Eye Any Time Soon
Harry & Meghan Won't Throw the Queen Under the Bus
Advertisement - Continue Reading Below
Harry & Meghan Have Nothing to Lose in Oprah Chat
Meghan Didn't Need Prince Harry to Be Wealthy
What to Wear to Meet Queen E, According to Celebs
Meghan in New Clip: Royal Family Is "Different"
Is Harry & Meghan's Archewell Update a Royal Diss?
Why Is the Royal Family Called "The Firm?"
Palace Is Looking Into Meghan Bullying Allegations
Meghan & Eugenie Are Still Close After Royal Exit