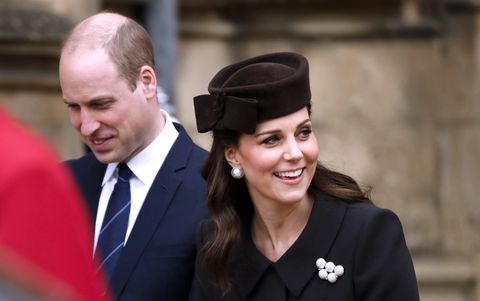 Today, Kate Middleton—who's due to give birth later this (!!!) month—made a surprise appearance at Easter services this morning. She and the Duke of Cambridge arrived at St George's Chapel in Windsor, England, the same spot Prince Harry and Meghan Markle will marry on May 19.

The Duchess of Cambridge wore the same brown hat with the pretty bow on St. Patrick's Day in 2015:

According to a royal reporter, the Duke and Duchess arrived late to the service—though, if you're a royal, is there ever really such a thing as being late?

William and Kate arriving late for the service pic.twitter.com/iRyh5VTY3D

They joined the Queen, Princess Eugenie, and other members of the royal family at the church, though, sadly, Prince Harry, Meghan Markle, and the royal babies, Prince George and Princess Charlotte were not there.

This is a surprise appearance for Kate Middleton because the mum-to-be is said to be on maternity leave as of this week. According to Hello!, Kate's due date is thought to be around April 23, so this will likely be the last time we see her before she gives birth to her third child. The Lindo Wing at St. Mary's Hospital where she will give birth is already prepping for the big event, according to Travel & Leisure. Bystanders noticed that the railings outside the hospital had been given a new coat of paint (all the better for paparazzi photos), and US Weekly reports that a "luxe maternity suite" has been on lockdown since mid-March.

This content is created and maintained by a third party, and imported onto this page to help users provide their email addresses. You may be able to find more information about this and similar content at piano.io
Advertisement - Continue Reading Below
More From The Ultimate Guide to the Royal Family
Meghan and Diana Had Similar Issues with the Queen
The Queen Insisted on Cutting a Cake with a Sword
Advertisement - Continue Reading Below
Harry Texted Kate, Not Will, When Lili Was Born
Kate's Kids Want Her to Stop Taking Their Pictures
Kate Wore a Pearl Bracelet That Used to Be Diana's
Harry's HRH Title Was Removed from a Diana Display
Harry and Meghan Are Trying to Keep the Peace
Films That Pull Back the Curtain on Royal Life
Harry Was Left to Suffer After Diana's Death
How Queen Elizabeth II Got the Nickname Lilibet