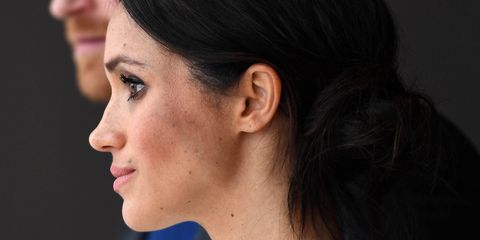 The royal wedding is mere weeks away, so it's unsurprising that a new book all about Meghan Markle, called Meghan: A Hollywood Princess, is due to be released on April 17.

Written by Princess Diana's biographer, Andrew Morton, the new book contains several brand new revelations about the former Suits actress, and how she found herself becoming a member of the British royal family. Here are the most shocking claims made in Morton's new book:

According to Morton (via Us Weekly), Markle met Engelson at a bar in Hollywood, and the producer was allegedly responsible for helping her secure a small role in Robert Pattinson's movie Remember Me.

But when Markle had to relocate to Toronto for Suits, Engelson stayed in Los Angeles. Morton writes that, "The marriage ended so abruptly that Meghan sent Trevor her diamond wedding and engagement rings back by registered mail," and that her ex "can barely contain his anger" about the brutal situation even now.

Apparently, Markle's role on Suits gave her a new lease of life. Morton writes (via Daily Mail), "She was her own woman now, earning a steady income, making new friends on-set and off, no longer dependent on her husband’s connections."

2. She had instant chemistry with Prince Harry.

Everyone knows that Prince Harry and Markle met on a blind date, which apparently took place at London’s Soho House on July 1, 2016.

Because life is a romantic comedy, Morton writes (via Us Weekly), "they had each other at 'Hello.'"

The author describes that first date as "intoxicating" (perhaps he was watching through the window?). And Us Weekly flags the significance of a photo that Markle posted on her now defunct "Instagram account of two Love Hearts candies with the message 'Kiss Me.'" This was, allegedly, a message to the prince.

3. Markle has always been obsessed with Princess Diana.

Morton writes in the new book that Markle was devastated when Princess Diana died in 1997. Via Us Weekly, Morton says, "Meghan and her friends watched the funeral of Diana, Princess of Wales, in early September 1997, tears coursing down their cheeks."

And "According to family friends, she was intrigued by Diana, not just for her style, but for her independent humanitarian mission, seeing her as a role model." This suggests that she was very much aware of Prince Harry before meeting him.

Morton quotes a supposed "friend" of Markle's called Ninaki Priddy as revealing, "She was always fascinated by the royal family. She wants to be Princess Diana 2.0."

4. Markle has been Queen before.

Even though her future husband is currently fifth in line to the throne (but will get bumped to sixth once Kate Middleton's baby arrives), Markle already has experience being Queen. Homecoming queen, that is.

As The Times reports in an excerpt from Morton's new book, Markle was made her high school's homecoming queen in 1998. One of her teachers described her as "a standout. She had charisma, no doubt."