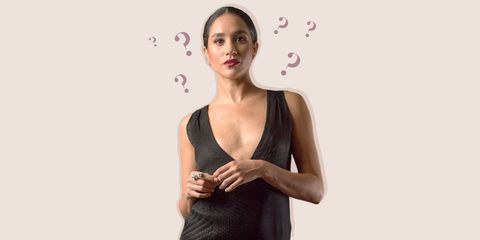 Meghan Markle is living the rom-com dream and dating a royal. The Suits star and Prince Harry are officially engaged after dating for over a year! (Do yourself a favor and check out her gorgeous ring immediately.) Which begs the question: what will Meghan Markle's official title be when she and Prince Harry tie the knot next spring? Here's what we know.

First, can Prince Harry and Meghan Markle even *get* married?

Well, yes, obviously. In 2017, this might seem like a ridiculous question—but Harry's royal status complicates things for two reasons: Markle is divorced and Catholic (according to People, she attended the private Immaculate Heart Convent school in L.A.).

Markle divorced producer Trevor Engelson in 2013, but this isn't a huge obstacle because there's already precedent for royals marrying divorcées. (Prince Charles and his wife Camilla Parker Bowles were both divorced before their marriage in 2005.)

The Queen will absolutely have a say in the matter.

Even though the supposed obstacles to Markle and Harry's potential marriage are easily navigated from a legal standpoint, Queen Elizabeth will still have to sign off on the union or Harry could lose his place in the line of succession.

2015's Succession to the Crown Act placed limits on an old rule from the Royal Marriages Act of 1772, which gave the monarch the right to approve marriages of all distant royal relations. Under the new rules, only the first six in line for the throne require the monarch's consent to marry—Prince Harry is currently fifth in line, meaning he would need his grandmother's permission to marry Markle.

So, what will Markle's title be?

According to Royal Central, in the United Kingdom wives automatically take their husband's title, meaning Markle will be HRH Princess Henry of Wales (admittedly a little weird). However, she will not be Princess Meghan, since "princess" is a title that you have to be born into under the British monarchy (which is why Kate Middleton is Catherine, Duchess of Cambridge—not Princess Kate).

Royal Historian Marlene Koenig explains that like William, Harry will likely be made a Duke—therefore his wife will be a Duchess.

"Most likely, he will be created a Duke. Sussex is available so [Markle] would be HRH the Duchess of Sussex. Her rank would be a princess by marriage of the United Kingdom, Great Britain, and Northern Ireland," Koenig said.

Welp, that settles that! Mark your calendar for spring 2018 and get ready for another royal wedding 😘.

Kayleigh Roberts Kayleigh Roberts is the weekend editor at Marie Claire, covering celebrity and entertainment news, from actual royals like Kate Middleton and Meghan Markle to Hollywood royalty, like Katie Holmes and Chrissy Teigen.
This content is created and maintained by a third party, and imported onto this page to help users provide their email addresses. You may be able to find more information about this and similar content at piano.io
Advertisement - Continue Reading Below
More From Celebrity
See a Rare Portrait of Princess Diana's Mother
Kelly Ripa's Husband Left Her a NSFW Comment
Advertisement - Continue Reading Below
Jennifer Lopez on Learning to Love Herself
Diana's Wedding Interview Footage Is Telling
The Queen May Honor Kate Later This Year
Olivia Wilde & Harry Styles Keep It Profesh on Set
Prince Harry on How Tabloid Attacks Changed Him
Watch Orlando and Katy After Her Performance
Kate Middleton Debuted Long, Straight Hair
Prince Harry's Surprise Inauguration Appearance