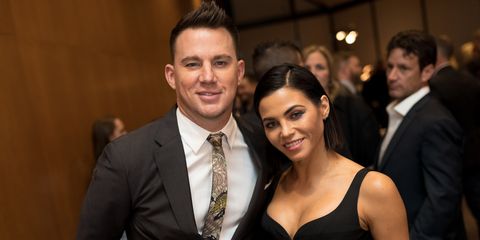 The couple released a joint statement to People, which they also shared on their Instagram accounts, detailing their decision to separate:

Obviously, fans are finding the news difficult to accept, because the Tatums once seemed to be one of the most solid Hollywood couples. However, a recent interview given by Dewan Tatum might have hinted at a growing discord between them.

In February this year, Dewan Tatum spoke to Health about her relationship with Tatum, and was quick to dispel the idea that her marriage was, in fact, perfect.

Dewan Tatum told Health: "When people say you guys have such a perfect life, I want to scream and tell them no one's perfect. I think there are such things as great fits. It is a great fit as long as you are growing together, and I think up until this point we’ve really grown together."

But it seems that, despite being a "great fit," the Tatums experienced problems every married couple encounters, that ultimately they couldn't work through.

Dewan Tatum hinted at deeper issues when she told Health:

"I think a couple needs to be conscious and to want to do the work and be willing to look at the parts of you that need work. Both of us have been pretty aware and willing to do that. We’ve always had the same values. But we’re not perfect! Are you kidding? We fight like other couples, we disagree about things, we have days where we don’t really like each other."

While the Tatums have decided to separate, it's clear that they remain loving and supportive co-parents, who will always respect one another. And as anyone who's survived a marriage breakdown will tell you—that's major.

Related Story
Channing Tatum and Jenna Dewan Tatum Separating
Amy Mackelden Amy Mackelden is a freelance writer, editor, and disability activist.
This content is created and maintained by a third party, and imported onto this page to help users provide their email addresses. You may be able to find more information about this and similar content at piano.io
Advertisement - Continue Reading Below
More From Celebrity
Prince Harry Remembers Prince Philip
Prince William Statement on Prince Philip's Death
Advertisement - Continue Reading Below
Meghan and Harry Are Facing Security Threats
Selena Gomez Is Drenched in Fake Blood on Set
Amanda Seyfried Talked About Having Panic Attacks
Harry Arrives in the U.K. For Philip's Funeral
Matthew Perry Deletes 'Friends' Reunion Instagram
The Queen's Corgis Are Helping Her With Her Grief
Charles is Looking Forward to Seeing Harry Again
Will & Harry to Walk Together at Philip's Funeral