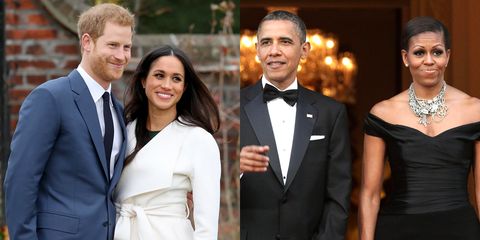 Prince Harry and Barack Obama go way back—but despite their hanging out together at Kensington Palace and interviewing each other on a BBC radio program, the former U.S. president and first lady did not receive an invitation to the royal wedding. But don't worry, no other political leaders did either, which means British Prime Minister Theresa May, President Trump, and Melania Trump will not be in attendance.

According to a tweet from Daily Express royal reporter, Richard Palmer, “It has been decided that an official list of political leaders—both UK and international—is not required for Prince Harry and Ms. Markle's wedding. Her Majesty's Government was consulted on this decision, which was taken by The Royal Household.”

Palmer added that no one would be invited based on a position they held, and that Prince Harry and Meghan Markle will personally know everyone who attends their wedding.

Daily Mail royal reporter Rebecca English confirmed that the Obamas did not receive an invitation. This morning she tweeted: "President Obama & his wife, Michelle, will NOT be guests at Prince Harry & Meghan Markle’s wedding next month—and nor will Donald Trump. The couple have decided not to invite any political leaders both from the UK & abroad, which means that even Br PM Theresa May is uninvited."

A source told English that it was not necessary for Prince Harry to have such a formal guest list because he is not a direct heir to the throne. English added that the Obamas "are very much looking forward to seeing them soon."

Hopefully we'll see another reunion—maybe a double date?—again soon after the honeymoon. 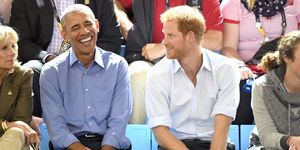