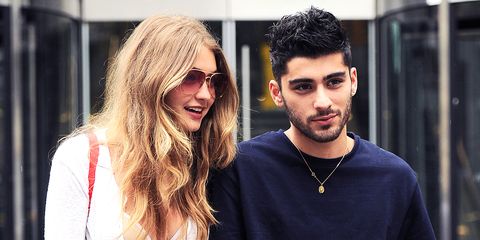 A month ago, Gigi Hadid and Zayn Malik confirmed the news of their breakup. And since that sad, sad day, neither have commented about the split—until now. During a phone interview with On Air With Ryan Seacrest Malik opened up about how he thought he was going to love Hadid forever.

“I was in love, and I think that’s pretty evident,” the 25-year-old singer said. “I was aspiring to be in love with someone for the rest of my life and the rest of theirs, as we all do. Things change and we move forward in life. Times change, but that’s what I was thinking when I wrote it.”

By it, he means his new single, "Let Me," which dropped yesterday. The emotional lyrics had fans wondering if the song was inspired by Hadid.

“We go through experiences so we have memories and stories and things to write down and contemplate and think about,” Malik continued. “You get to really put your experience into something. It should be remembered forever.”

Clearly, his new song was an ode to Hadid and their relationship. Malik also revealed he will be releasing more music soon—and if we had to guess, there's probably going to be a whole bunch of Hadid references on this album.