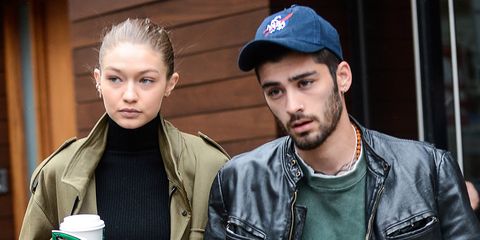 Zayn Malik and Gigi Hadid have split after more than two years of dating, Malik confirmed on Twitter this afternoon.

"Gigi and I had an incredibly meaningful, loving, and fun relationship and I have a huge amount of respect and adoration for Gigi as a woman and a friend. She has such an incredible soul. I'm grateful to all of our fans for respecting this difficult decision and our privacy at this time, we wish this news could have came from us first. We love you all. xZ"

Hadid later confirmed the news with a heartfelt post. They even signed their statements the same way:

"Breakup statements often seem impersonal because there is really no way to put into words what two people experience together over a few years...not only in the relationship, but in life in general. I'm forever grateful for the love, time, and life lessons that Z and I shared. I want nothing but the best for him and will continue to support him as a friend that I have immense respect and love for. As for the future, whatever's meant to be will always be. xG"

The longtime couple are said to have ended their relationship earlier this month after growing apart for quite a while. Back in January, Zayn made headlines when he got a tattoo of what appeared to be Gigi's eyes on his chest.

They also celebrated the former One Direction member's birthday that same month. As of now, Zayn is not following Gigi on Instagram, though she's still following him.

love this man more than I could ever put into words, & am inspired by his drive to be and do better everyday ✨ cheers to YOUR YEAR my @zayn - happiest happiest birthday & 25th year of life !! I’m proud to be by your side x