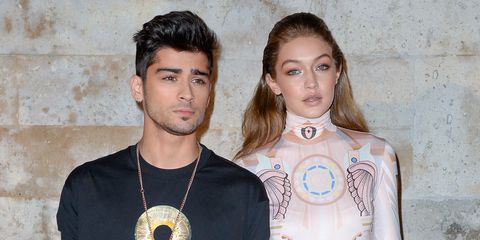 Since it was announced that Zayn Malik and Gigi Hadid have broken up, the former One Direction singer has been undergoing some dramatic changes.

Malik has always been something of a style chameleon, so it's unsurprising that he's been acquiring some new tattoos, and changing his hair, since breaking up with his girlfriend of over two years. But the latest changes Malik has undergone are pretty surprising.

Firstly, he's dyed his hair blond. While this isn't the first time the singer has dabbled with bleach, it is the first time his hair has looked *this* blond. You know, the kind where you took the bleach off too early, because it started to burn your scalp and you freaked out, so now your hair's super brassy, but you make it look like that was intentional. Hey, we've all been there!

And that's not all. Malik also, evidently, bleached the rest of his hair, too, and is now sporting a bleach blond beard to accompany his new hairstyle. E! News spotted the singer "on the set of a video shoot in Miami, sporting bleached blond hair and a matching beard." And the photos of Malik's blond beard over at E! are pretty spectacular.

But wait, there's more. Malik also debuted a new tattoo on the back of his head, following on from that giant neck tattoo he was having done last week. And the new head tattoo is of a black rose (head over to Us Weekly for pictures of the newly blond Zayn modeling his head tattoo).

Basically, when life throws lemons at your face, go big or go home.

Related Story
Gigi Hadid and Zayn Malik's Last Photo Together
Amy Mackelden Amy Mackelden is a freelance writer, editor, and disability activist.
This content is created and maintained by a third party, and imported onto this page to help users provide their email addresses. You may be able to find more information about this and similar content at piano.io
Advertisement - Continue Reading Below
More From Celebrity
Gwen Stefani Is Unrecognizable In New Insta Post
Lady Gaga Wore Serious Platform Heels in Rome
Advertisement - Continue Reading Below
North West's Pet Lizard Has Its Own SKIMS
Is Harry & Meghan's Archewell Update a Royal Diss?
Why Is the Royal Family Called "The Firm?"
Meghan Says Palace Is “Perpetuating Falsehoods"
Twitter Blasts Media's Targeting of Duchess Meghan
Palace Is Looking Into Meghan Bullying Allegations
Meghan & Eugenie Are Still Close After Royal Exit
Harry's Oprah Interview Suit Is a Nod to Archie