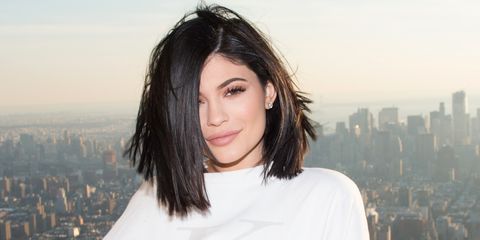 Kylie Jenner is one very proud mom. Since welcoming her daughter, Stormi Webster, to the world in February, Kylie has been sharing pictures and videos of her adorable baby girl.

There was Stormi's introduction to the world, in the form of a tiny, baby hand gripping Kylie's perfectly-manicured thumb.

There have been posed shots and selfies:

There have been photos of Stormi with relatives:

i mean.. does it get any better than this?

And pictures of Kylie and Stormi out and about in the neighborhood:

But no image of Stormi Webster with which Kylie Jenner has gifted the world can compare to the videos she just posted on Snapchat. In the clips, Stormi giggles and grins for the camera while adorned with some of the app's classic filters, like the flame crown:

And the pink teddy bear ears:

While Kylie talks (in filtered audio) to Stormi in all of the videos, the sweetest clip shows the new mom leaning down to kiss her daughter while repeating, "I love you" over and over again. "Hi, happy girl. I love you. I love you!" she says sweetly.

The Snapchats are beyond adorable. Stormi looks like she might just be the happiest baby on earth.

The videos come after Kylie spent the weekend at Coachella with her big sister, Kourtney Kardashian (who is launching a collaboration with Kylie Cosmetics later this month) and boyfriend Travis Scott.

Many Twitter users were critical of Kylie's decision to attend the annual music festival, but others came to her defense, pointing out (rightly) that moms need time for themselves, too.

Kylie was clearly ecstatic to be reunited with her daughter after a weekend away and, if the beaming smile on Stormi's face is any indication, the feeling was mutual.

Kayleigh Roberts Contributor Kayleigh Roberts is the weekend editor at Marie Claire, covering celebrity and entertainment news, from actual royals like Kate Middleton and Meghan Markle to Hollywood royalty, like Katie Holmes and Chrissy Teigen.
Advertisement - Continue Reading Below
More From Celebrity
Celebrities Who Are Mistaken for Other Celebs
Dolly Parton, Icon, Started a Viral Meme
Advertisement - Continue Reading Below
Meghan & Harry's Trademark's Been Blocked for Now
Khloe Kardashian's House Has a Room for Extensions
Katie Holmes Stuns in a White Oversize Coat
Taylor Swift Opens Up About Past Eating Disorder
Courteney Cox's 'Friends' Photo Has a Sweet Secret
Celebrities With Kids You Didn't Know About
People Think Prince Charles Ignored Mike Pence
Brad Responded to Those Photos With Jen