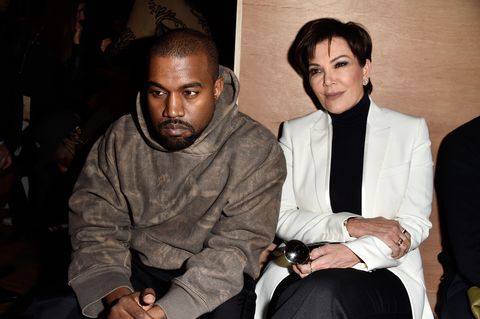 Update, 4/25: Kris Jenner has responded to reports that she and son-in-law Kanye West have gotten in "explosive" fights recently—and she says those reports are "Lies, lies, lies."

Jenner tweeted her response along with a link to a People magazine story about the alleged fights, which cited unnamed sources close to the family.

The KarJen matriarch also shut down a report that Kanye appears to be "on the edge" and "is very hard to deal with right now."

Original story, 4/24: Kanye West appears to be going through some ~stuff~.

The rapper has reportedly cut ties with several people in his inner circle, including his managers, lawyers, and some of his closest friend, according to People.

Kanye has reportedly also been fighting with his mother-in-law, Momager Supreme Kris Jenner.

"He’s had huge blow-ups with Kris. She sees how erratic he’s acting and is most concerned about her daughter’s brand. She’s also trying to be a good mother-in-law, so he’s having explosive issues with her too," a source close to the family told People. "Everyone is really, really worried."

Vacay selfie (Glam by Me!)

According to the source, Kim Kardashian is trying (unsuccessfully) to take control of the situation in every way she can.

"Kim is trying to control him and the situation, but he can’t be controlled. She’s trying her best to support him on social media and show a different side of things, but it’s just not working," the source said. "He genuinely believes he’s God and a genius and that he can do everything on his own. He has a great love for Kim, but in his mind he doesn’t think Kim is a genius, and he’s telling her he knows what he’s doing."

TMZ reported that Kanye parted ways with his manager, Scooter Braun, and his lawyers after issuing an ultimatum that they work exclusively with him or not with him at all.

Earlier today, Kanye shared a tweet that's the closest thing to officially weighing in anyone in the Kardashian (or Jenner or West) family has done.

to be great is to be misunderstood

"To be great is to be misunderstood," he wrote. Maybe we just don't get it.