Alexis Bledel is about to be your favorite person of the week, because she just dropped a major hint that a third Sisterhood of the Traveling Pants movie is already in the works. At least, we hope.

“We just pitched a third movie and I hope it comes together,” the former Gilmore Girls star told Jimmy Fallon last night. Fallon, who revealed he's a huge fan of pretty much anything Bledel is in, immediately started freaking out.

"What? That's big news! You have to do that. Please do that," Fallon begged, along with the rest of the world.mAnd yes, it might actually be happening, because almost simultaneously, Blake Lively also made a comment about the possibility of another movie.

"I think that people who love the movie want to see it. Fans have gotten bigger movies made. Deadpool is all thanks to the fans. So I'm saying we'll do it," she told Entertainment Tonight at CinemaCon last night, also casually trolling her husband Ryan Reynolds, yet again. 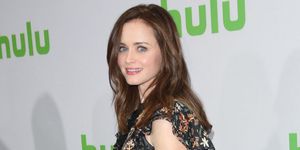 But it seems that Reynolds is rooting for a third installment too, as his trailer for the new Deadpool movie just came out and he name-dropped one of his wife's most famous roles toward the end: "Doing the right thing is messy, but if you wanna fight for what’s right, sometimes you have to fight dirty. And that is why Sisterhood of the Traveling Pants is pure pornography."

This isn't an official confirmation, but in the words of Deadpool, we're hoping Lively, Bledel, and the rest of the girls are "fighting dirty" to get this project going.

Alex Warner
This content is created and maintained by a third party, and imported onto this page to help users provide their email addresses. You may be able to find more information about this and similar content at piano.io
Advertisement - Continue Reading Below
More From Celebrity
William's Private Secretary Quits After 10 Months
A Look at Royal Family Portraits Through the Years
Advertisement - Continue Reading Below
40 Celebrity Sisters Who Look So Much Alike
The Best TV and Movie Wedding Dresses of All Time
40 Rare Photos of Grace Kelly Through the Years
The 50 Most Popular Episodes of ‘Friends,’ Ranked