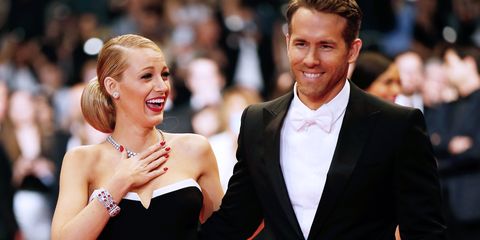 Ryan Reynolds can't stop trolling his wife, Blake Lively, and here's the proof. In the latest Deadpool 2 trailer, Reynolds can't resist an opportunity to lampoon his wife and her career, and he trolls her hard.

Related Story
Blake Lively and Ryan Reynolds Troll Each Other

Towards the end of the trailer, in character as Deadpool, Reynolds says, "Doing the right thing is messy, but if you wanna fight for what’s right, sometimes you have to fight dirty. And that is why Sisterhood of the Traveling Pants is pure pornography."

Reynolds and Lively have a long and important history of trolling one another on social media. Famously, in 2017, Reynolds wished his wife a happy birthday by cropping her out of a photo. Lively returned the favor, by sharing a photo of her husband with Ryan Gosling, cropped so as to focus on The Notebook star instead of her beloved.

Lively and Reynolds co-starred together in 2010's Green Lantern, while they were both with other people. Following Reynolds' divorce from Scarlett Johansson, rumors he was dating Lively began towards the end of 2011, when she was spotted leaving his apartment, according to Grazia.

"We've never gone a week without seeing each other. There's no major decision that I make without him. The best part is when we turn off our phones and just talk and hang out. He's my best, best friend. What do you do with your best friend? You do nothing."

And long may the trolling continue. 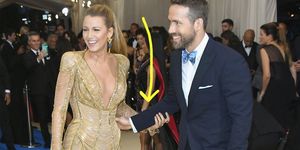 Blake Lively and Ryan Reynolds's Body Language
Amy Mackelden Amy Mackelden is a freelance writer, editor, and disability activist.
This content is created and maintained by a third party, and imported onto this page to help users provide their email addresses. You may be able to find more information about this and similar content at piano.io
Advertisement - Continue Reading Below
More From Celebrity
Emma Watson Stunned at the Earthshot Prize
Kate "Didn't Have Much Energy to Bond" With Meghan
Advertisement - Continue Reading Below
Blake Lively Trolled Ryan Reynolds Again
Kourtney Kardashian and Travis Barker Are Engaged!
See Kate Middleton's Subtle Environmental Look
Prince George "Adored" Seeing Dinosaur Fossils
Kate Middleton Borrows The Queen's Fashion Trick
Princes Charle and William "Competing" Over Causes
Lilibet May Be Christened in California After All
The Sweet Family Photos in Prince William's Office