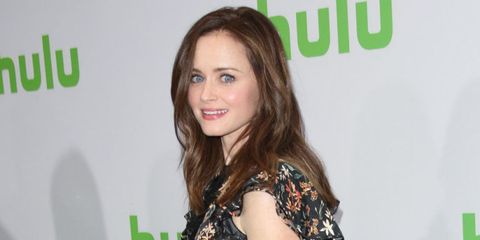 Ever since that jaw-dropping cliffhanger at the end of Gilmore Girls: A Year in the Life, fans have been desperate for more. Netflix even fanned the flames recently with a tweet teasing the unknown paternity of Rory's little Gilmore fetus.

Where's an eighth grade science fair when you need one? #GilmoreGirls pic.twitter.com/6qYnjbn32q

While promoting her upcoming Hulu series, The Handmaid's Tale, for the TV Critics Press Association press tour this week, Alexis Bledel was grilled about the future of Gilmore Girls. Her answer will give fans hope—but not a ton of it.

"I haven't heard anything," Bledel told reporters of a new season of Gilmore Girls, according to Variety. "It hasn't been a conversation as of yet. All of us are just wanting to tell a good story. The only thing I can say about future installments is that it would be about the story and the timing. We want to tell a great story."

We also want a great story, so that sounds good to us. But what about Rory's pregnancy? Can't Bledel at least give fans some insight into that whole thing? Not really, she says, since creator Amy Sherman-Palladino is the master of the Gilmore universe.

"I honestly haven't gone down that path of imagining it," she said of who might be the father of Rory's baby. "It all lives in Amy's imagination. She has a very clear vision and always has and we haven't had input as to the stories and the characters on the show very much."

Well, fingers crossed for ASP's imagination to churn out another great chapter of the Gilmore story to get the cast back together again, because if the Final Four Words are any indication, she'll take the secret of Rory's baby daddy to her grave rather than give it away in an interview.