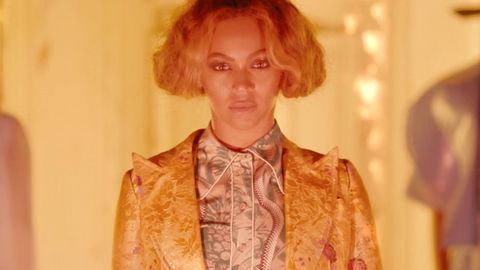 Like most of the world, I was breathless as I watched Lemonade. The thoughtful intersection of music, art, and poetry was not only visually astounding—Beyoncé had effectively brought to life the plight and beauty of the Black woman. From the burden of childbearing to the soul-crushing stages of betrayal—all set in a dreamy, unapologetically Black world straight out of a Toni Morrison novel. But almost immediately, this brilliance was eclipsed by one question: Who is Becky?

"Beyoncé just erected a moving portrait of Black womanhood—and here I was, searching for The Other Woman in the story."

And I'm not even innocent: As a card-carrying member of the Beyhive, I too spent a lot of time in my group chats trying to solve the mystery of who would dare cross our Queen. But still, the more we all talked and guessed about Becky, the more uncomfortable I felt. Beyoncé just erected a moving portrait of Black womanhood—and here I was, distracted by my search for The Other Woman in the story.

Problematic racial dynamics aside, BeckyGate underscores a much more common narrative surrounding heterosexual cheating: how we instantly vilify the The Other Woman over the man.

When my own significant other cheated on me after eight years together, the first questions people usually asked me were about her: Who was she? Did you know her? Did they work together? What does she look like?

To me, the "Becky" in my situation was irrelevant. "Becky" didn't betray me; he did. But the people in my life were consumed by wanting to know about her. I wanted to scream as loud as I could, This isn't Becky's story. It's mine.

Of course, we don't really know how much of Lemonade is *actually* about Beyoncé's marriage. After all, she had many co-writers, and could've taken inspiration from her own parents' scuffle with infidelity. Plus, the brilliant spoken word in the visual album is all by the Somali-British poet Warsan Shire—not Beyoncé herself.

For all we know, there is no literal Becky, or there could be many Beckys. But by obsessing over The Other Woman—real or metaphoric—we're perpetuating the sexist cycle of wronged women. Why are we so quick to flood Becky with threats of physical violence while Jay-Z just gets a few half-hearted tsk tsks and funny memes about being in Bey's doghouse?

"by obsessing over The Other Woman—real or metaphoric—we're perpetuating the sexist cycle of wronged women."

What's most important about Lemonade is not who it's about, but what it's about. I mean, come on, y'all. The world's biggest living pop star, who has been notoriously private about her relationship and personal views for years, just released a movie where she jumps to her death to become an underwater angel; admits to the world that yes, even Beyoncé gets cheated on, and—for millions of predominately white viewers to see—proudly fills the film with the kinds of brown-skinned women who have been told for hundreds of years to hide and tame themselves.

This isn't Becky's story; it's Beyoncé's. An honest, raw gift to us all that reminds us that even the mighty can fall—and then pick themselves back up again.

For me, Lemonade felt as though Beyoncé had slipped her finger under my chin and forced me to look into the mirror and see myself. There you are, she told me. You are Black, you are broken, you are beautiful, you are vulnerable, you are scarred. You are all of those things, and that's okay. And if anyone has a problem with that, they better call Becky with the good hair.

This content is created and maintained by a third party, and imported onto this page to help users provide their email addresses. You may be able to find more information about this and similar content at piano.io
Advertisement - Continue Reading Below
More From Celebrity
Iconic Party Photos From the Past
The Best TV and Movie Wedding Dresses of All Time
Advertisement - Continue Reading Below
40 Celebrity Sisters Who Look So Much Alike
40 Rare Photos of Grace Kelly Through the Years
A Look at Royal Family Portraits Through the Years
The 50 Most Popular Episodes of ‘Friends,’ Ranked