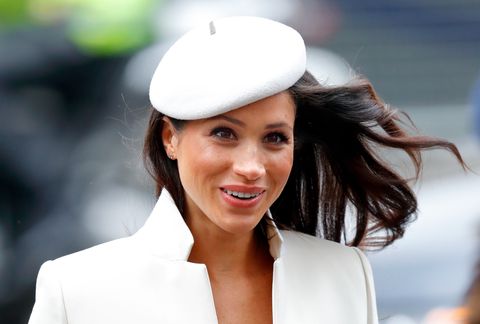 The royal wedding is now just two weeks away and that means more and more details about the big day are coming out. One thing that's still a bit of a mystery, however, is Meghan Markle's wedding dress.

The Daily Mail has rounded up the opinions of "multiple royal and fashion industry sources" who say Meghan's wedding gown is being designed by British couturiers Ralph & Russo—the same designer behind the stunning dress she wore in her engagement photos.

Prince Harry and Ms. Meghan Markle have chosen to release this official portrait photograph to mark their engagement. The photograph was taken by photographer @alexilubomirski earlier this week at Frogmore House, Windsor.

The Mail reports that the hand-stitched, heavily-beaded gown will be the first of two Meghan wears on the big day (she'll reportedly change into a second look for the reception). The Mail shared a full image of the imagined dress on its website and a sneak peek of the possible design on Instagram Stories.

The Mail's imagining of the dress is similar to the one our royal expert, bridal designer Caroline Castigliano, expects Meghan to wear on her wedding day.

"I don't think her dress will be as traditional as say, Kate's was, but I definitely think it will have a very classic look about it and I think she'll have a very strong nod to the royal family of her appreciation and her respect for them," she says.

She shared a couple of sketches of what she expects the dress to look like:

"I think everything will be covered, so there would be absolutely no cleavage, she'd definitely have her shoulders and her arms covered with a sleeve, these things would just be expected and I'm sure her dress will be quite classic."

Castigliano also agrees that Meghan will most likely turn to a British designer for the dress, which is in line with the Ralph & Russo prediction. She thinks that it's possible Meghan will honor her American heritage with her reception dress, however.

"I believe she will be with a British designer certainly for the wedding dress," Castigliano says. "And for the evening party I'm sure she'll go into something that's much more of her personal style. And for that, I think it would be really nice if she wore an American designer."