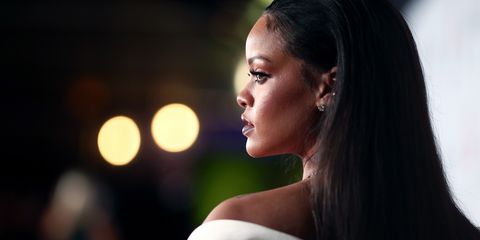 In absolutely horrifying things about being a celebrity: Rihanna's Los Angeles home was reportedly broken into Wednesday and the guy spent the night and then had to be tased in order to leave.

According to TMZ, the man in question is 26-year-old Eduardo Leon of Orange County, who was arrested for felony stalking and is currently being held on $150,000 bail.

"Law enforcement sources tell us authorities were dispatched to RiRi's L.A.-area home Thursday morning after they were notified of a potential intruder on suspicion that her alarm had been tampered with. Once officers arrived, they came upon a man who appeared to have stayed the night."

It's unclear why officers had to tase the suspect, who reportedly came out of the house willingly when asked. It's also unclear how he got into the house and if he intended to take anything from the premises before being caught.

Thankfully, Rihanna was not home during the break-in. She was in New York City earlier this week for the Met Gala, which she co-hosted, and today her Savage x Fenty lingerie line launched. The singer joins a growing list of celebrities who have been victims of particularly invasive break-ins of late. In April, a 22-year-old man named Roger Alvarado broke into Taylor Swift's New York City townhouse and reportedly took a shower before sleeping in the singer's bed.

Alvarado, originally from Homestead, Fla., was arrested after the incident and reportedly charged with felony stalking, burglary, criminal mischief, and criminal trespass. It was the second time Alvarado has been caught breaking into the property, which Swift was (thankfully) not living in at the time of either incident.

Related Story
Shop Rihanna's Savage x Fenty Lingerie Collection
Kayleigh Roberts Contributor Kayleigh Roberts is the weekend editor at Marie Claire, covering celebrity and entertainment news, from actual royals like Kate Middleton and Meghan Markle to Hollywood royalty, like Katie Holmes and Chrissy Teigen.
This content is created and maintained by a third party, and imported onto this page to help users provide their email addresses. You may be able to find more information about this and similar content at piano.io
Advertisement - Continue Reading Below
More From Celebrity
The Queen and Philip Are Breaking Royal Tradition
Harry Said Becoming a Father Changed "Everything"
Advertisement - Continue Reading Below
This Ellen and Justin Interview Is Very Awkward
Umbrella Academy's Elliot Page Comes Out as Trans
Princess Diana's Butler Talks 'The Crown'
J.Lo Twins with Her Mom in Sweet Holiday Selfie
Kate Rewore a Dress With a Sentimental History
Chrissy Took Her First Shower Since Losing Jack
Diana Said She Felt Like a "Product" as a Royal
Billie Eilish Silenced Her Body Shamers