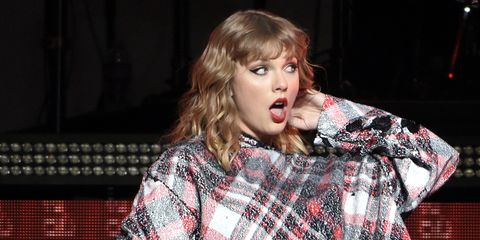 In the most messed up real-life version of Goldilocks ever, a man broke into Taylor Swift's New York City townhouse, took a shower in her bathroom, and then slept in a bed.

The man was 22-year-old Roger Alvarado, from Homestead, Fla., Page Six reports. He was apparently arrested after police responded to a call about a burglary at the property at 12:30 a.m. Friday morning.

Swift purchased the three-story SoHo property for $18 million a few months ago, but wasn't living there at the time of the break-in, thankfully.

Polices sources said that cops found a ladder leading up to a broken window. When they entered the townhouse, they found Alvarado sleeping in Swift's bed and it was apparent he had also taken a shower there.

Alvarado has reportedly been charged with felony stalking, burglary, criminal mischief, and criminal trespass. According to The New York Times, this is the second time Alvarado has been caught at the premises—he was arrested there in February after breaking down the front door with a shovel. YIKES. YIKES. YIKES.

"[The stalker] was wearing a mask and rubber gloves when he was taken into custody and told police he had driven from his home in Broomfield, Colorado, to see Swift... A search of his car turned up a knife, rope, ammunition and more masks and gloves," according to the police report about the man arrested on suspicion of stalking.

This is terrifying and not something any person should ever have to deal with.

Kayleigh Roberts Contributor Kayleigh Roberts is the weekend editor at Marie Claire, covering celebrity and entertainment news, from actual royals like Kate Middleton and Meghan Markle to Hollywood royalty, like Katie Holmes and Chrissy Teigen.
This content is created and maintained by a third party, and imported onto this page to help users provide their email addresses. You may be able to find more information about this and similar content at piano.io
Advertisement - Continue Reading Below
More From Celebrity
Harry & Oprah's Mental Health Doc Has a Title
Serena Williams Might Miss the Tokyo Olympics
Advertisement - Continue Reading Below
Jennifer and Ben Have "Unreal" Chemistry Together
The Sussexes Marked Archie's Bday in a Lovely Way
Are Jennifer Lopez and Ben Affleck Back Together?
Queen's Cousin Accused of Selling Access to Putin
Meghan Wore a Meaningful Necklace for Vax Live
How Celebrities Are Celebrating Mother's Day 2021
Gabrielle and Kaavia's Mother's Day Pic is So Cute
Ben Affleck's Moving Tribute to Jennifer Garner