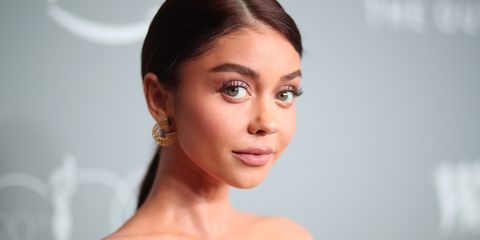 In today's proof that everything is the worst, beloved actress Sarah Hyland is in hospital. Although the Modern Family actress has yet to reveal any specifics regarding her condition, she has suffered from chronic pain and illness for years, and has been open about her fight with kidney dysplasia. Hyland took to Instagram stories in honor of yesterday's National Selfie Day to share a shocking photo of her swollen face.

"Sometimes a selfie is more than just a good angle and feelin cute. This time for #nationalselfieday I've decided to share my truth. As painful as it is," Hyland wrote. "So here is my face that was torn from work against my will. But I'm very grateful it was. Health should always come first. #stayhealthmyfriends."

The following story on Hyland's feed noted that the actress has been hospitalized since Sunday. "Can't wait to come back to my precious angel princess. She's perfect and knows exactly what I need at all times 😍," she wrote about her dog. "This was taken this past Sunday. Day before hospitalization. She was literally telling me to get treatment."

This isn't the first time Hyland has been candid about her health—in 2012, the actress revealed that received a kidney transplant after a lifelong battle with kidney dysplasia, and she has since remained vocal about her condition. Last year, after Hyland's fluctuating weight sparked anorexia rumors (gotta love internet trolls), the actress told fans via Twitter that her weight loss was purely health related. "I haven’t had the greatest year. Maybe one day I’ll talk about it but for now, I’d like my privacy," she explained.