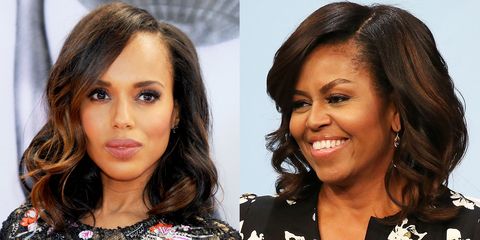 Michelle Obama and Kerry Washington were spotted having a power lunch in Los Angeles on Thursday afternoon because that's the only kind of lunch two people as powerful as them could have.

The pair met at Spago in Beverly Hills, prompting immediate speculation that they were working on a project together, in light of the Obamas' recent deal to produce content for Netflix.

TMZ reporters caught up with Kerry as she left the lunch meeting and grilled her about everything from the topic of conversation to who picked up the check.

Per TMZ: "We asked Kerry if Michelle got her to sign on the dotted line for a project. Her answer was coy, and therefore ... interesting."

The actress and former first lady reportedly left the restaurant through different exits, as if to say, "nothing to see here..."

"President and Mrs. Obama have always believed in the power of storytelling to inspire," Eric Schultz, a senior adviser to the former president, told The New York Times. "Throughout their lives, they have lifted up stories of people whose efforts to make a difference are quietly changing the world for the better. As they consider their future personal plans, they continue to explore new ways to help others tell and share their stories."

Kerry has been close with the Obamas for years. She even attended their final, star-studded bash at the White House in 2016, along with Usher, Beyoncé, and Meryl Streep.

This content is imported from Third party. You may be able to find the same content in another format, or you may be able to find more information, at their web site.
Kayleigh Roberts Contributor Kayleigh Roberts is the weekend editor at Marie Claire, covering celebrity and entertainment news, from actual royals like Kate Middleton and Meghan Markle to Hollywood royalty, like Katie Holmes and Chrissy Teigen.
This content is created and maintained by a third party, and imported onto this page to help users provide their email addresses. You may be able to find more information about this and similar content at piano.io
Advertisement - Continue Reading Below
More From Celebrity
What Happens on Katie's Season?
Jennifer Lopez Wears Old Bracelet From Ben Affleck
Advertisement - Continue Reading Below
Simone Biles Cheers on MyKayla Skinner
See the Royals Socialize at a 1991 Cocktail Party
Eugenie's Pics from Inside Harry and Meghan's Home
Queen Trolled Tourists Who Didn't Recognize Her
Blake and Ryan Recreated Their First Date on IG
Charles Expertly Ignored Boris Johnson's Snafu
How Kitty Spencer's Wedding Dress Honored Diana
Dolly Parton On the #FreeBritney Movement