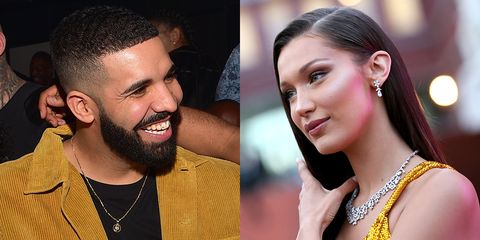 After the drop of Drake’s new album Scorpion, there’s only one track that everybody’s talking about (not strictly true but for the purpose of this article, it is). The lyrics of “Finesse” tell the story of Drake’s romance with an unnamed fashion star, and it didn’t take long for fans to link the song with rumored flame, Bella Hadid.

Last summer, Drake and Hadid were romantically linked after he threw her a lavish 21st birthday party, and the pair were later spotted quietly leaving a club together. At the time it was thought that the whole thing was short lived, with some claims that the rapper had ghosted the model in November and other sources insisting they were just friends from the start.

But after listening to “Finesse,” it’s easy to believe that there could be more to this one than we all first thought. Drake drops references to New York Fashion Week and sisters that are “too hot to handle” while wanting to "commit" to the mystery lady, so hey, it’s not exactly rocket science.

That’s Drake’s take on the situation, but it looks as though Bella’s side of things is very different. Beyond done with the constant speculation, she took to Twitter to directly insist that everyone is reading way too much into the whole thing.

Responding to a user who posed the age old question of “who hasn’t he banged” in response to an article about the pair, Bella hit back: “Not me!!! That’s disrespectful. WHY CAN’T PEOPLE BE FRIENDS WITHOUT all the insinuation?”

Not me!!!🤷🏻‍♀️that’s disrespectful. WHY CANT PPL BE FRIENDS W/o all the insinuation 🤭🧐😩🤬

What followed can only be described as a cavalcade of emojis. A hand over mouth, an inquisitive face, a despairing face and an angry face. The modern Ulysses.

Perhaps more importantly than the romance gossip, we should all probably be discussing the fact that Bella Hadid is seemingly living in some kind of real-life fan fiction and nobody's noticed yet.

Imagine being Bella Hadid and having both The Weeknd and Drake writing songs about you. Some people really do have it all 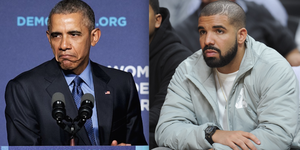 Obama Says Drake Is Not The Best Rapper
Lucy Wood Contributor, MarieClaire.com Lucy Wood spends most of her time writing about celebby things, reading books, and waiting for the glorious day that she have enough millions for a pet sloth.
This content is created and maintained by a third party, and imported onto this page to help users provide their email addresses. You may be able to find more information about this and similar content at piano.io
Advertisement - Continue Reading Below
More From Celebrity
Alicia Silverstone Got Banned From a Dating App
The Queen Just "Reluctantly" Canceled a Trip
Advertisement - Continue Reading Below
Adele's Album Will Feature a Sensitive Voicemail
Selena Gomez Just Debuted a Sleek Bob
Zendaya Looked Incredible at the 'Dune' Premiere
Kate Middleton Is Helping Tackle Addiction
The Queen Was Advised to Stop Drinking for Now
Scott Disick Is "Not Happy" for Kourt and Travis
Emma Watson Stunned at the Earthshot Prize
Kate "Didn't Have Much Energy to Bond" With Meghan